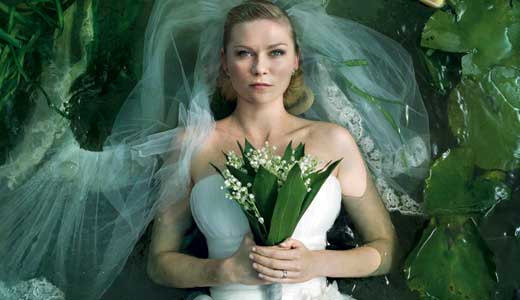 A bad Lars von Trier film can inspire early retreats to the theater parking lot. The good ones, like his latest, are the type you only wish you could walk out on. “Melancholia” is often difficult to watch and even harder to look away from. It opens with an elegantly composed title sequence that is both overture and epilogue: an eight-minute, super slo-mo apocalypse set to Wagner’s “Tristan und Isolde,” in which the planet Melancholia collides with our own. Stunning depictions of the film’s principle characters at the moment of impact are woven into the segment, creating a succession of imagery that will likely follow you home.

Things don’t get any sunnier from there. Even without this haunting preface, the start of the narrative instantly hints at how doomed these characters are, when Justine (Kirsten Dunst) and Michael (Alexander Skarsgard) are obstructed from their lavish wedding reception by a country road too windy and narrow for their stretch limousine. After hoofing it the rest of the way, the signs of a marital stillbirth go from symbolic to psychological, when we meet Justine’s divorced parents (Charlotte Rampling and John Hurt).

Selfish in their own unique ways, it is clear the moment we meet Mom and Dad that they have set their daughter up for relationship failure. Dad has arrived with two younger dates named Betty, and Mom — who blew off the church ceremony entirely — toasts the newlyweds with a bitter screed against matrimony. But the biggest threat to this union may be the bride herself. Justine continually leaves Michael in the lurch, orbiting in and out of her party, disappearing at key moments to say hello to her horse, take a nap with her nephew, bathe, urinate on a golf course and much worse.

The best explanation of Justine’s trouble comes during an exchange with her sister, Claire (Charlotte Gainsbourg), the film’s center of gravity and whose own story provides the second chapter in this two-part disharmony. From beginning to end, Claire and Justine’s dialogue is the film’s finest. This example comes when Claire tries to lead Justine back to the reception.

“Don’t say a word of this to Michael,” Claire advises.

Von Trier routinely tortures us by torturing his heroines — and, famously, the actresses who play them. In this case, it’s Claire, a supporting actress, who is most run through the dramatic ringer. (Actually, this is as much Gainsbourg’s movie as it is Dunst’s.) Dunst’s Justine is certainly complex, but the stress-case that is Claire most resembles a Von Trier woman: getting pulled and torn in a dozen directions at once. She is as distressed for the end of days as she is for her sister.

Justine crashes into and obliterates all of the tireless, coddling plans Claire makes in hopes of easing her sibling’s angst. In rare moments of impatience, Claire twice utters the phrase, “Sometimes I hate you so much.” These deserved outbursts come near the end of each chapter — first when Justine spoils the wedding that her sister funded and fought so hard to keep together, and second, after Justine craps on Claire’s plan of how they should spend the end of the world together. The second “I hate you” makes clear that, for Claire, these two forms of Melancholia are intertwined. Her sister is the embodiment of Melancholia in the Freudian sense, and symbolically, as Melancholia the runaway planet.

It’s hard to root for any of the pampered and bitter characters who inhabit this filmmaker’s universe. If anything, you may find yourself cheering on Melancholia as it courses toward Earth, threatening to put everyone out of his misery. If you do, though, know that you are beginning to see things Lars von Trier’s way.