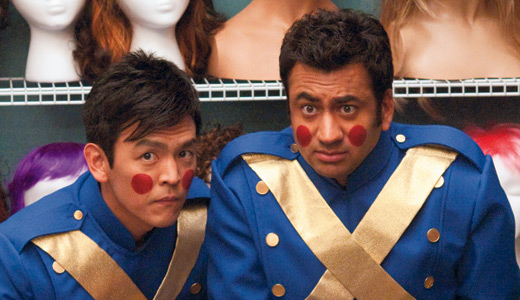 If anyone is recession proof, it’s probably Kal Penn. After only five years in Hollywood, the New Jersey native landed a leading role in the stoner comedy “Harold & Kumar Go To White Castle.”

“It tanked at the box office,” says Penn, eight years and two sequels later. “So we were like, ‘Oh, man, OK. Well, I guess this was fun. It was nice to meet you …’ and then, three months later, it comes out on DVD and suddenly starts picking up all this steam.”

Most of the movie roles Penn took in between sequels were less successful, and it took getting past a stereotypical villain job on “24” to land a more satisfying, regular part on “House, M.D.” But after a season and a half of what a million actors would kill to get, Penn left to take a job in the new presidential administration, as an associate director in the Office of Public Engagement.

Penn — who served under his birth name, Kalpen Modi — spoke recently at Bellarmine University about community service. “It was for the ‘Do Something’ initiative, which encourages folks to get involved on a community level, whether it’s art or volunteerism, or just doing something other than complaining about what other people aren’t doing.”

Penn’s job in the White House called on him to serve as a liaison to “young Americans, the arts, and Asian-American and Pacific Islander communities,” and the 34-year-old self-described “nerd” enjoys engaging with others. After his lectures, Penn says, “Q&A is always fun. I don’t like to talk at folks for very long; I hated that when I was in college.”

Penn claims to not be fully clear on why people have been so interested in his career moves. “It’s not a unique story at all … It’s not uncommon for people to take a break from the private sector to serve as political appointees. You’ve got doctors and lawyers and professors and people that are serving this president, they’ve served past presidents; they do it for a year or two, or four, or eight years, and then go back to what they were doing before.”

Penn’s “Kumar” contract required him to take a leave from D.C. last year to film the Christmas-themed movie, now in theaters, which uses 3-D. “The 3-D is cool, there are a couple of explosions, and the special effects are awesome, but they’re not action movie special effects,” he says. “What people like about Harold and Kumar is their relatability, so, to put on 3-D glasses, you feel like you’re on the couch with them or you’re in these insane situations. It’s so cool to see. I was wondering when we started, ‘Is this a 3-D gimmicky thing?’ But I thought it was awesome.”

He has also returned to TV, appearing this season with “Kumar” series co-star Neil Patrick Harris on “How I Met Your Mother.” Up next, if all goes well, will be a new comedy series starring and developed by Penn for NBC’s Thursday night lineup.

“I was so excited — it’s what every actor would want to do: ‘Wouldn’t it be cool to develop my own show?’ I love ‘30 Rock’ and ‘The Office’ and ‘Parks and Recreation,’ that kind of stuff, so I’m working with them on developing a workplace comedy. To me, what I love about the ‘Harold and Kumar’ movies is that those guys could have looked like anybody, could’ve been from anywhere, it just so happened they looked like (co-star) John (Cho) and I, and are from New Jersey.”

Penn’s idea is to set the series at the U.N., most similar in tone to “Parks and Recreation” but moved to the middle of New York’s most diverse mini-world.

“I think what it should focus on, in order to be funny, is everyday situations. Regardless of what office you work in, there’s always beef between people, or somebody’s got a crush on somebody else — whether you’re at the U.N. or you’re working at Walmart, office politics are always very similar. Hopefully we can riff off of the diversity of the characters, but (tackling racial issues) definitely wasn’t a hidden desire.”

The setting also incorporates another favorite topic. “They’re all public servants, in some capacity, and that’s kind of neat. I don’t think we’re ever going to do plotlines on the Arab-Israeli Conflict,” Penn laughs, “but something like the International Year of Rice, I’ve always been fascinated by — like, how does something like that actually happen? How do 198 countries decide that this is going to be the International Year of Rice instead of solving another issue? I think it’ll be more that kind of stuff.”