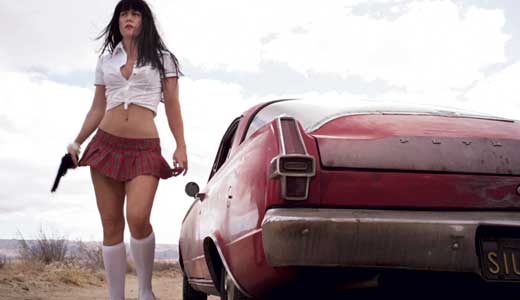 Nearly 20 years ago, Shane Woodson worked as an usher at Village 8 Theatres. My, how time flies. On Saturday, Woodson returns to Village 8 to premiere “Barracuda,” which he directed and stars in. The film is a dark comedy that broaches a sensitive topic — child molestation and sexual deviance. The protagonist, played by Christy Oldham, who also wrote the film, travels across the country vigilante-style to take out these lurking predators. Woodson is proud to show the film in his hometown.

LEO: Tell me about your journey from Louisville to Hollywood.
Shane Woodson: I make my living as an actor in Los Angeles, and this will be my third feature that I’ve directed. I started out as an illustrator, and then I got into acting in high school. I was in a play senior year (at Atherton) — “Anything Goes” — and as soon as the stage light hit me, I knew this is what I wanted to do. Two years later, I moved to Los Angeles … rode my old BMW motorcycle across the country, and now I’ve been out here for 16 years.

LEO: What’s the message of “Barracuda”?
SW: This movie is about a female portrait painter/phone sex operator who gets emotionally triggered to go on a cross-country rampage to bring sexual deviants to justice. What’s interesting is that writer/actress Christy Oldham actually had a job as a phone sex operator once, and the calls she received were the nucleus of this screenplay. The five main characters she chases were based on these real-life phone calls. The character’s mother left her an old ’66 Plymouth Barracuda, and she drives it across the country bringing these people down.

This movie brings all this terrible stuff that’s been going on — like the case in Penn State — to light. My passion was to bring this difficult subject matter to the forefront. A lot of the times people wear blinders — whether it’s a family situation or whatever — and pretend it doesn’t exist while people are molested and hurt.

LEO: Were you surprised about the sex scandal at Penn State?
SW: It’s a horrible situation that never should have happened. The guy should have been stopped in his tracks long ago. It’s a real unfortunate thing. Preventive maintenance should have been implied a long time ago. That’s always been my motto — stop something before it hurts someone. Hopefully it’ll help people going forward to remember to keep your radar up. To stop this behavior before someone gets hurt. That’s the reason, again, why this movie has been rewarding. I want to help people.

LEO: What kind of reactions have you received so far?
SW: This film has really been doing well at the film festivals all over the country. I’ve been traveling with the film, as has Christy. We got best feature at the Mississippi International Film Festival … where Danny Glover gave us the award. We’ve got us a winner here — a stellar film. Critics have loved it. Since I’m a Louisville native, I wanted to make sure we did a screening here before the madness begins.

LEO: How did your first film, “Cain and Abel,” help you with directing “Barracuda”?
SW: I’ve been in about 25 movies and 15 TV shows. I directed my first stage production in Louisville, and then I shot a short film in the upstairs of the Rudyard Kipling. When I directed “Cain and Abel,” it was just a natural progression of my directing.

LEO: You got to work with Flavor Flav in “Cain and Abel.” What’s he like?
SW: He was a blast to work with. We became friends. Anytime he’s in L.A., he calls me up and we meet down at this crazy place called Roscoe’s House of Chicken and Waffles. He wore the clock in my film in both scenes. He’s definitely an entertaining guy.

LEO: What are your favorite hotspots in Louisville?
SW: Churchill Downs has always been a favorite. I’ve been going since 1977 when I saw Seattle Slew win the Kentucky Derby with my father (novelist Joseph Woodson Oglesby). I’ve always liked to go to Bernheim Forest. I like to be near the Ohio River — I have fond memories of riding my motorcycle up River Road.