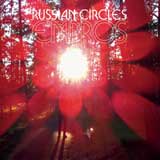 Russian Circles have been playing their unique brand of instrumental music for years while always heading in a different direction with each album. On Empros, they continue to evolve, offering a noticeably darker vibe that blends well with their spacey post-rock-influenced dynamics. Opener “309” blasts out the gate with riffs devastatingly thick, flowing as if they’re trying to suffocate you with a newfound affinity for heaviness. “Mladek,” with its simple post-rock introduction, blossoms into a dense, math rock wall of guitars that feed off the opening riffs and, like many tracks on here, locks into a solid groove, letting it simmer into deliciously engaging soundscapes. The result is a methodically engineered collision at the intersection between post-metal and post-rock. They even throw in vocals — a first for them — on closer “Praise Be Man,” where tender vocal swirls soar over slowly strummed guitars that collide with echoes of sonic exploration. It ultimately erupts into a feedback-riddled wave that washes the album away, an epic elegy that concludes Empros beautifully.