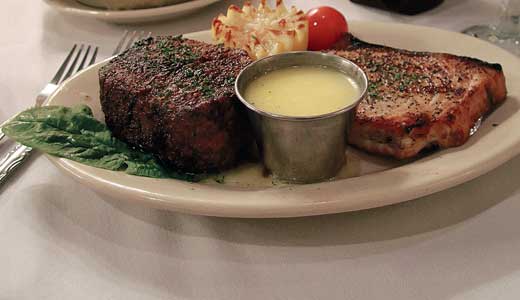 Here’s very good news for steak lovers in Louisville: Del Frisco’s, an old-school steakhouse that’s enjoyed local landmark status for 30 years, is running at the top of its form.

Steak has always been big in Louisville, with a broad variety of options ranging from high-end chains like Morton’s and Ruth’s Chris to mini-chains like Jeff Ruby’s, and locals like the decades-old Pat’s and the newer Z’s Steakhouse and Oyster Bar, not to mention the beefy Argentine delights of Palermo Viejo.

Amid all this protein action, Del Frisco’s seemed to temporarily lose its luster, and after a couple of disappointing visits a while back, I hadn’t returned. But good news travels fast, and I’ve been hearing reports that Del Frisco’s has quietly regained its luster. Old-timers will be delighted to learn that the affable owner-host Audrey Lapp remains on hand to greet you.

We made haste to check it out, heading over there recently with a couple of friends for a dinner involving aged, USDA prime steaks and other delicious goodies, along with quality service and prices more than fair by steakhouse standards.

Did I mention that Del Frisco’s is “old school”? This definition suits the style of the place as well as the bill of fare. Extending through several rooms in the same St. Matthews commercial building that houses Havana Rumba, it projects the image of a classy if rather conservative club. Decor is based on heavy wall and ceiling beams, wall treatment that resembles aged parchment, exposed white brick and stained glass.

Well-spaced tables are draped in white over dark brown and set with comfortable leather chairs, and a couple of bronze and crystal chandeliers hang over the main dining room. A bar area offers more casual seating and, in one section, overstuffed leather furniture that looks comfy enough to sleep in.

The menu features a wide variety of steaks in many cuts and sizes: rib-eyes, sirloin strips, filet mignon, prime rib and more, priced in small and large sizes and combinations, mostly in the $30 range, prime rib a little less. A dish of tournedos (the tip end of tenderloins) may be had for a mere $28; a massive Chateaubriand is $60, but that serves two. At least.

If you’d prefer your dinner on the surf side of the turf, shrimp, swordfish, lobster tail, king crab legs and salmon are available, and should anyone wish a pork or chicken dish in this temple to the noble bovine, you’ll find one of each on the bill of fare. Salads and side dishes round out the a la carte menu, so you can build a respectable tab if you pick and choose. Still, as noted, you can get out of here for a bit less than at some of the high-end steak competition.

Vegetables? Oh, yeah, veggies. Actually, the side dishes include a number of well-prepared and flavorful veggie options, not least of which is Del Frisco’s iconic spinach dish, Green Phunque, which would be anathema to vegetarians thanks to its bacon content. Still, one of our group preferred a meatless dinner and was delighted when the kitchen graciously offered to put together a tray of steamed broccoli and cauliflower, grilled asparagus, a white-and-wild-rice pilaf and a silver boat of thick sharp cheese sauce.

The rest of the gang leapt onto the meat like hungry lions on a wildebeest. The 12-ounce rib-eye ($31.95) was delivered rare as ordered, seared brown on the exterior and unimpeachable in texture and flavor. A side order of Del Frisco’s steak fries ($4.95) the size of small golden logs also won raves.

A combo filet-and-swordfish dinner ($28.95) featured a 2-inch-thick filet mignon, tender as butter and perfectly medium-rare as ordered, and a slab of grilled swordfish, mild as veal and fresh as springtime. It was served simply with fresh lemon and drawn butter. A broiled salmon fillet ($24.95) was just right, too, perfectly fresh, grilled but not overcooked.

A flotilla of sides and apps floated around the table: Home-style loaves of delicious, fresh-baked white bread, sliced thick and served with oversize crocks of whipped butter, seemed to arrive in endless refills. An appetizer order of a dozen crisply fried oysters ($12.95) was more than enough to go around, crisp and golden, with a spicy cocktail sauce and the simple option of fresh lemon. A Caesar salad ($6.50) and Del Frisco’s salads ($7.50) were well-made and ample, and a bowl of onion soup ($6.75) was thick and rich, under a blanket of melted provolone on a thin crouton.

The tab, as noted, wasn’t cheap but definitely competitive by steakhouse standards at $219.31 for four; courteous and skilled service from Mrs. Lapp’s granddaughter Cathy earned a 20-percent-plus tip.