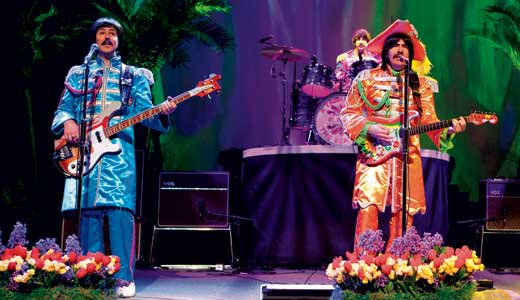 The Associated Press hailed “Rain — A Tribute to The Beatles” as “the next best thing to seeing the Beatles.” Paul McCartney might take issue with that claim, but at least one member of the tribute troupe, Louisvillian Mark Beyer, is doing his best to support the tagline.

Fittingly, “Rain” performs three shows this weekend at the Kentucky Center, giving locals a chance to judge the AP’s claim for themselves and to also support a local musician in the process.

Beyer provides keyboards, horns and strings — and any other sound one can’t make with guitars, bass and drums — for “Rain,” and he does so by meticulously researching the exact way the Beatles made those sounds originally. He then brings musicians into his home studio and works toward re-creating those sounds for the live show, playing it electronically.

“I like to uncover how the Beatles did it,” he tells LEO. “I try to figure out exactly how they did it, and I try to do the same.”

And he doesn’t just deal in loops or samples — he re-creates individual notes. He recently managed to procure a copy of the original clarinet track to “When I’m 64” so that he could more closely mimic it for the “Rain” performances. Turns out, he was close with his original interpretation, but not close enough.

“I had a little bit of subtle vibrato and a little more air than what was in the original sound,” he says.

As one would imagine, the process is time consuming. “There’s, like, six seconds at the end of ‘Strawberry Fields’ filled with sound effects,” Beyer says. “That took me three weeks.”

The tribute act travels constantly and has a rotating cast; the show also recently completed a successful run on Broadway, which prompted Beyer to up the ante in terms of his re-creations. Unlike many such tributes, “Rain” runs the gamut of the Beatles’ career — whereas the highly acclaimed “1964: The Tribute” doesn’t stray past 1966 (and then only for “Yellow Submarine” and “And Your Bird Can Sing”), “Rain” carries the audience from Hamburg to Let It Be.

While the Beatles always performed live as a foursome, Beyer notes that “Rain” portrays the band as if it had continued touring into the late 1960s. They would have needed a fifth member to play keyboards, such as when they employed Billy Preston late in their recording career.

“As the Beatles age,” Beyer says, “I join them on stage.”

Beyer is living out a dream in a way. A life-long Beatles fan, he was playing in local band The Rigbys — with which he still performs when schedules align — when he was discovered for “Rain” by way of Abbey Road on the River, the annual Beatles-inspired music festival in Louisville. Short of being a Beatle, this is probably as close as it gets, and he gets to perform songs that even the Beatles never tried to play live.

In fact, many of the performers in “Rain” are veterans of Beatlemania, including three that appeared in the film. These musicians have been playing together longer than the Beatles themselves did.

Of course, even without his current gig, Beyer is one of those guys who probably would be re-creating these sounds on his own at home — he’s a true Beatles fan, and as such he takes great pride in making “Rain” sound as much like the Beatles as he possibly can.

It’s not an easy task, either; think about some of the songs on Sgt. Pepper’s Lonely Hearts Club Band and Magical Mystery Tour — playing keyboards live for those Beatles would have been a pressure-packed chore, just as Beyer’s role in “Rain” is. When he performs this weekend behind the four “Beatles,” he won’t have time to wave to the crowd.

“There is a full orchestra’s worth of activity going on back there,” he says. “I use all my hands and feet, and sometimes I wish I had more.”