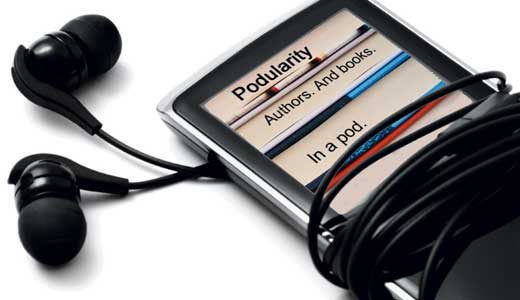 I have a new best friend, and his name is George Miller. I suppose I should call him an imaginary best friend, as he will never know of my existence, but I sure am glad I stumbled upon his.

George Miller is the human being with whom every bibliomaniac wishes she could go to dinner. He is erudite but wears his erudition oh-so-lightly. He is a consummate conversationalist. He is an interlocutor, a listener, a gentleman. He has a voice to die for.

He is as at ease talking with a psychologist as with a zoologist, a memoirist, a biographer, a novelist, a poet, a philosopher, journalist, playwright, or historian, even a sinologist.

What is a sinologist, you ask? You’ll have to tune into Miller’s interview with T.H. Barrett to find out. OK, I’ll give a hint. It has to do with “The Woman Who Discovered Printing,” and guess what? Her name wasn’t Gutenberg! It was Empress Wu. Those pesky Chinese, always besting the West.

Let’s back up for a minute to talk about what a great word Podularity is and how Miller came up with the concept. He has a background in publishing, beginning with the decade he spent as editorial director of Oxford University Press. With the decline of print books and its concomitant lack of public support for authors, Miller saw the need for a new way to bring less well-known imaginative works to the world of readers.

He believes that “there is no better way of inspiring a reader to pick up a book than hearing the author’s voice.” Case in point: A couple of years ago, I skimmed a review of a novel about a whorehouse in the Wild West, thinking it sounded like the second to last subject in the world I wanted to read about (after hedge funds). Yet after becoming so addicted to Miller’s wondrous dialogues that I had to listen to every single interview he’s ever done, I came across his interview with author Chris Hannan, who turns out to be a Scotsman far more interested in the female experience of the American Wild West than in the cowboy part. So he wrote the novel “Missy,” which is not the name of the heroine. Missy is a slang term for the liquid opium that Dol, the prostitute, is addicted to. It gets her through her nights.

Dol has quite the voice throughout the novel. “Sometimes when I’m gonged,” she says, “I have an immense feeling inside me that I can govern chaos.” Gonged! This book has the best slang since Jane Harris’ “The Observations.”

Speaking of which, Harris is another of Miller’s fab interviewees — on his other podcast, “The Faber Podcast,” where he conducts even longer interviews, strictly with Faber-published writers.

The man reads more than Harold Bloom — while remaining far less showy about it all.

At the iTunes prompt, you can type in “Podularity” as well as “The Faber Podcast” and find the whole backlog of his interviews. At last, kids: a radio-free column!