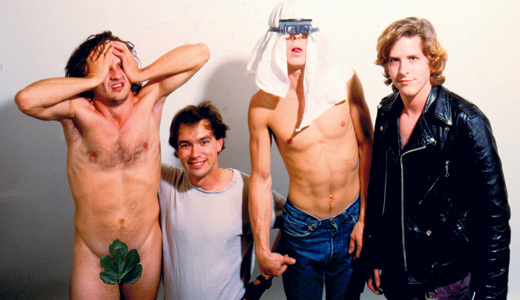 The second annual Cropped Out music festival takes place downtown this weekend, featuring underground acts like MV & EE, Bill Orcutt, John Wesley Coleman III and the reunited Scratch Acid, plus many more. Co-founders James Ardery and Ryan Davis grew up in Louisville, but Ardery now lives in Brooklyn, so LEO asked Davis to inform us about what they had to offer.

LEO: Explain yourselves to our readers who voted for HullabaLOU as “Best Festival” in our Readers’ Choice poll. Who are you?

Ryan Davis: Cropped Out is a small promotions company and collective of friends, started by two Louisville natives, with the primary intent of providing our hometown with an alternative source of live music. The whole idea came about early last year when a series of frustrating circumstances led me to decide that, if you want to see something happen in this town, you often have to do it yourself. I contacted my friend in Brooklyn, who was and still is well connected as a promoter and musician in the city. I went to college in Chicago and had worked at record labels and booked shows at art spaces and bars around town, and toured the country for years with my own band. So between the two of us, there was all this talk of bringing friends through town on their own respective travels and pairing them with bands we were stoked on around Louisville — of which there was no shortage. What better way than to throw them all in the cage together for one weekend? Well, in retrospect, there was probably a plethora of better ways, but we’re learning more with every one-off show we book, and I hope some of that knowledge rubs off on the festival in our second year of doing it.

LEO: How do you decide whom to book?

RD: I think we tend to begin with friends’ bands, first and foremost. Then we start chewing over a small handful of long-shot dream headliners, and fill it in from there. Last year was more of an effort, at least on my part, to get as many of my friends involved as humanly possible. Not that that has changed this time around, but in an effort to not have the same festival all over again, we’re looking around under some slightly different rocks.

LEO: What about locals?

RD: An accurate representation of local musicians is absolutely imperative to the project. It’s the life source of the entire operation. We can sit around all day trying to bring bands with whom we are fascinated to town, but without that exchange of ideas between our community and its passers-through, that sense of participation, it defeats the purpose. We wouldn’t be doing this if it weren’t for the bands around here to whom we grew up listening, initially planted the seeds of the punk rock tree in our brains at an early age, before we went off into the world and decided how to harvest it. There are musicians in this town, some of whom are more or less “stuck” here, be it because of familial obligations or work or money or comfort or whatever. They may never have the opportunity to tour, or to be heard at all, which is criminal under some circumstances. So in bringing the weird world to Louisville, we are simultaneously, and proudly, showing Louisville to the weird world.