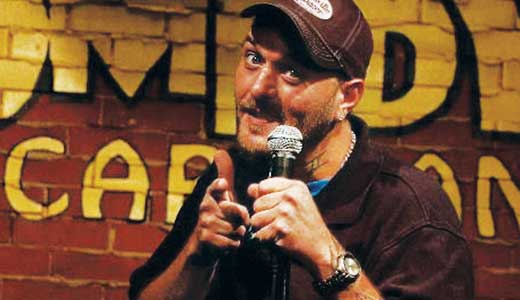 “When one show ends, another begins” would be a great motto for Wednesday night comedy shows in Louisville.

Every Wednesday night, “Caravan Raw” explodes with a high-energy assault on the funny bone. The show sprang from the separation between Comedy Caravan and the Louisville Comedy Underground, which left a void in the club for a weekly amateur show. In came comedian Jay Cox.

“I eventually came up with the idea, if we combine the professional acts that will be headlining the club Thursday through Sunday, with an open mic,” Cox tells LEO in his deep Mississippi drawl, “and make it raw and make it uncensored, then we might have something. (Club owner) Darrell (Holladay) loved it and let me run with it.”

In the months since the show launched, comedy fans have shown their support. “Now that the show has been going, we have ‘Raw Fans’ — people that come back every week just for the ‘Raw’ show,” Cox says. “I do something different all of the time; sometimes I’ll have a band, or a DJ, or we’ll get some comedians together and do improv. We’re just breaking it up, trying to keep it fresh, and trying to keep it exciting so people continue to wanna come.”

“Not to mention,” he continues, “It’s a bargain show. You get what amounts to a headline show for three bucks. It’s the middle of the week — I’m not gonna spend more than three bucks on a Wednesday night, so that was my thought process — $3 is perfect, anybody … even my broke ass … can come up with $3.”

And every week, just as the “Raw” show comes to an end, the “Comedy in a Fishbowl” show begins at 10 at Groucho’s in Germantown.

First and foremost, this isn’t an open mic show, so don’t show up expecting stage time if you’re an amateur. Every week, “Comedy in a Fishbowl” is meticulously booked and run by comedian Chris Vititoe.

“Groucho’s was the bar I would go to anyway,” Vititoe recalls of choosing the venue to house his alternative show. “It’s always got this cool, strange environment, with Groucho playing weird movies behind the bar and shit. It’s a small room, an intimate setting. The crowds are always attentive and respectful, and they just seem to get what we’re doing.”

Which leaves the tight-knit band of local comics who frequent the “Fishbowl” stage (including Danny Maupin, Tyler Jackson, and LEO Weekly’s 2011 Readers’ Choice winner, Kent Carney) free to explore places they wouldn’t normally go on other stages. “A lot of people will lead with off-the-wall stuff in a club,” Vititoe explains, “and more often than not the crowd won’t go with them. But at Groucho’s, it’s kind of expected — which makes the comedians more likely to do weirder shit, like dress in costume or play characters.”

The show has steadily increased its audience since its creation, which hints at a bright future, but Vititoe is cautiously optimistic. “I’m really liking where it is right now. It’s like when you first start dating a girl — if you’re a couple of months in and someone asks about kids or marriage, you’re just like, ‘I don’t know, I’m just having fun right now.’ It’s kind of in that stage of the relationship. It’s a free show, it’s loose, everybody has fun, and I don’t wanna mess with that. There’s something beautiful about not having pressure with this show.”