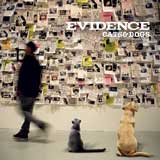 Emcee Evidence, one-third of the permanently on-the-cusp Dilated Peoples (who flirted briefly with radio via 2004’s collaboration with Kanye), has linked up with indie powerhouse Rhymesayers to release his second “official” solo (not counting instrumental LPs, an EP and a street mix). Self-produced with contributions from DJ Premier, Alchemist and others, Cats & Dogs is the least Cali-sounding record to come out of L.A. in years. This is a true boom-bap album with some nasty production. Forget about listening on little earbuds, break out your old D-cup-sized headphones for this one. Features from Raekwon, Ras Kass, Lil Fame (of M.O.P.) and labelmates Aesop Rock and Slug are used sparingly and effectively, breaking up Evidence’s somewhat thin midrange vocal just as your mind may think about wandering. It’s hard to pick favorites on such a balanced record, but the hook on “Late for the Sky” and the return to greatness by Primo on “You” are choice.