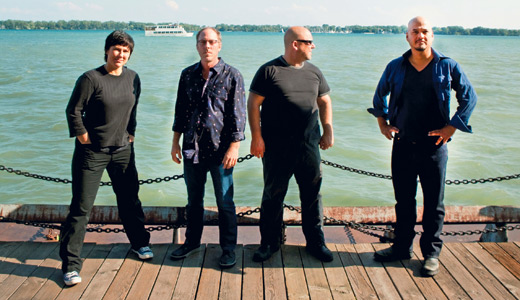 Editor’s note: Lebowski Fest co-founder and WHY Louisville proprietor Will Russell was the obvious person to interview Pixies drummer and part-time magician David Lovering. Aside from sharing a love of percussion and sleight-of-hand tricks, both men are dreamers — and characters — and LEO was glad to help make a superfan’s dream come true.

LEO: I’m very excited to talk to you. I have the Trompe le Monde logo tattooed on my right forearm.

LEO: I was 18 and high, you guys were my favorite band … it seemed like a good idea at the time. Anyway, I wanted to ask you how performing magic compares to performing music?

DL: I think it’s somewhat the same. I think the only difference is magic may present — maybe on a subconscious level — the impossible as possible.

LEO: What’s the best part of being in the Pixies?

DL: I love hanging around and touring and stuff. The travel, and the experiences of traveling, that’s the best thing about it.

LEO: What would you say is the worst part about being in the Pixies?

DL: The only thing I can say is playing the drums all the time. They should pay me time-and-a-half! I wish I’d taken harmonica as a kid.

LEO: How is being in the band different this time around, compared to what it was in the early days?

DL: I’d say on two levels: the level that we’re touring, which is much different, on a higher level. As far as the travel and the hotels, the venues that we’re playing — and also the crowd reactions. It’s a whole different animal, just in terms of intensity. And then, each of our mind-sets, inside the band. Because this is something that is kind of new to us, this level, so we appreciate it a lot more. Back in the day, everything was just happening. We did appreciate it, but it was just happening in increments. Now we see it in a whole new light, an appreciation of what was taken away and coming back. We’re absorbing it and enjoying it as much as we can.

LEO: Do you feel the Pixies were less appreciated in the original incarnation, and then over time people came to discover and really appreciate, from a historical perspective, what you guys have pioneered?

LEO: What was it like for you when you watched (Pixies documentary) “loudQUIETloud”?

DL: I remember seeing a test preview of it. I remember, I was sitting erect in a seat at the beginning of the movie; at the end of it, I was slumped way down in the chair (laughs). Because I gotta tell you — first off, that movie was done with a lot of timeline editing, things that needed drama. The way things happened — and they didn’t happen the way they did — it kind of painted me as going through this complicated time, but they followed us around for two years, and our band is the most boring — nothing goes wrong, nothing happens (laughs) — so, for that to come out of it …

LEO: You guys will be playing Doolittle in its entirety, right? Will there then be the hits afterward?

DL: Yes, we’ll do some b-sides from the Doolittle album, then we’ll do Doolittle A-to-Z, then we’ll come back again and do some other b-sides. Then we might do another encore, and that’s where we do a lot of older other material.

LEO: Have there been talks about doing other albums, like Surfer Rosa?

DL: We’ve been joking about it, because Doolittle has gone on for two tough years now. It was originally slated as the 20-year anniversary of that album, and it’s just never ended. I thought it ended two tours ago, but people still want to see us … It would be great to do Surfer Rosa, that’s a favorite of all of ours.

The Pixies with Surfer Blood