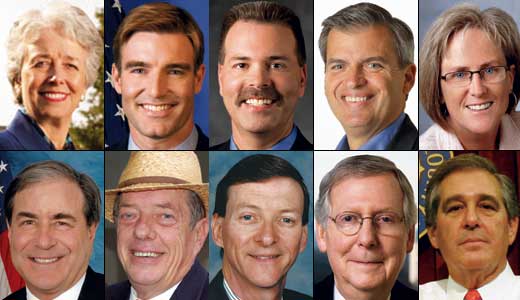 Brain: Crit Luallen — This superwoman puts her brainpower to work fighting corruption, incompetence and mismanagement throughout the state (she’s a busy lady). As auditor, she keeps a watchful eye on government to ensure they do good, not evil.

Face: Jack Conway — A strong jaw and chiseled good looks can go a long way in today’s superficial society, making the attorney general the clear choice for the face of our candidate. And that adorable dimpled chin didn’t hurt his cause either.

Mustache: Richie Farmer — The agriculture commissioner/GOP candidate for lieutenant governor sported a mustache long before hipsters brought it back in the name of irony. The sweet stache even has its own Twitter account: @RichiesMustache.

Smile: Hal Heiner — We wanted to dislike last year’s Republican mayoral candidate given his socially conservative views, particularly when it comes to gay rights. But we couldn’t help it — we liked him. Just try and rebuff that earnest, aw-shucks smile. Go on, we dare you.

Voice: Tina Ward-Pugh — This longtime Democratic councilwoman has a history of taking a stand, even when it means breaking from the party line. She butted heads with former Mayor Abramson on more than one occasion — and that had to hurt.

Spine: John Yarmuth — In a line of work where pandering and flip-flopping are the norm, Congressman Awesome stands firm in what he believes, says what he means, and then votes accordingly.

Lungs: Gatewood Galbraith — At 64, this man smokes weed regularly yet still manages to jog several miles a day (in skimpy running shorts, no less). Health conscious and pro-marijuana? He had us at “Pass the J.”

Heart: Jim Wayne — At a time when compassion is lacking in America, this state rep. fights for those whose voices are rarely heard, whether standing up for the poor in pushing for a fairer tax code or advocating for abolition of the death penalty.

Wallet: Mitch McConnell — You might find it odd that Mitch nabbed a spot in this endeavor, but money talks — and he’s got a shit-ton of it. The senator’s net worth reportedly exceeds $30 million, and last campaign cycle he raised more than $20 million.

Spirit: Jerry Abramson — Whoever said you can’t polish a turd never met Jerry. The former mayor was the epitome of enthusiasm when it came to this city, whether helping citizens clean up storm debris, leading citywide bike rides or touting downtown development.