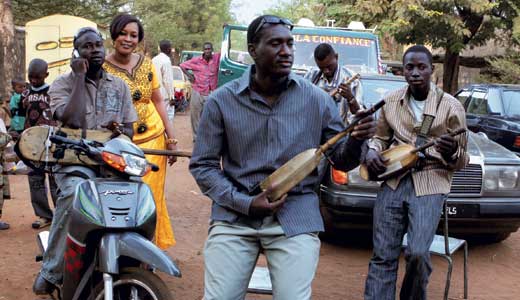 Veteran string picker Bassekou Kouyate has made some valuable friends — Taj Mahal, Bonnie Raitt, Eric Clapton, Ali Farka Touré — who have helped him expand his audience beyond Africa. His band’s most recent album, I Speak Fula, was released in 2009 by Sub Pop imprint Next Ambiance.

LEO: How did you learn to play the ngoni?

Bassekou Kouyate: I was brought up in a large family of active griots, traditional musicians who were sought out not just in our village but throughout the area of Ségou and in the capital, Bamako — even sometimes in neighboring countries, for social negotiations and entertainment. My father and uncles, just like their father, were skilled ngoni players. The ngoni is the signature instrument of male griots and, until recently, no other people played the instrument.

Following our family tradition, I was not actually taught until I was 8 years old. My father Moustafa was my teacher, and I was lucky because he was famous as a ngoni player. In addition, my maternal grandfather, Bazoumana Sissoko, was the most famous griot in Mali, but I didn’t get to know him well until I came to Bamako at the age of 16. By that time, he was blind, but he recognized that I was a serious player and was very fond of me. He could recognize me by feeling my hands.

LEO: The ngoni is said to be similar to the banjo, which is used often in American folk music. Do you listen to any banjo music from this part of the globe?

BK: I first heard banjo music when I came to the U.S., to a meeting in Tennessee about the protection of traditional blues music, and met up with well-known banjo players. It was there that I heard American music for the first time; we had no radio or TV, and all I knew was the music I made with other Malian players, who mostly played modern instruments — guitar, flute, drum sets — and with my family, who played traditional Malian instruments.

Since then, I’ve learned to listen to the banjo, which fascinates me because it is so obviously a descendant of the ngoni that was made in my grandfather’s time out of a round calabash with wood and gut strings, instead of the elongated hollowed-out wood base we use now. The U.S. player I’ve listened to most recently is Béla Fleck, with whom we went on tour in 2009. He is the most amazing musician and one of the people who is quickest to pick up on material brought to him by other musicians.

LEO: What can Malian music offer music fans in the United States?

BK: First, it is an opportunity to listen to your roots. When I first heard the blues, I thought it was Bambara music from my home area in Mali, and Americans will be able to hear the same similarities. Next, it shows how traditional music can be developed in a modern form, but Americans know all about that already — we can just show how it works for Malians of our tradition. There is a variety of traditions in Mali, from the Mandé, the Sorai, the Wassoulou, the Tuareg, the Bwa and many more. And above all, what our Malian music can offer music fans in the U.S. is that it will make them want to dance.

For an extended interview, go to http://bluecat.leoweekly.com.