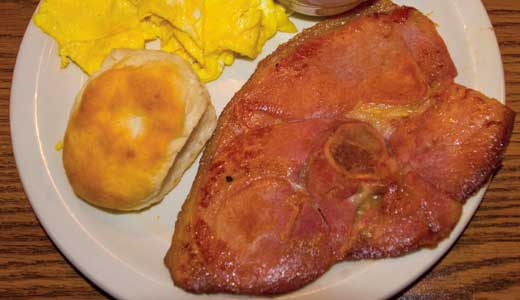 If you’re sitting in a friendly diner working on a stack of blueberry pancakes, and you suddenly realize the bar at the back of the room offers selected tastings of small-batch and single-barrel bourbons with tasting sheets to record your impressions, you have almost certainly found your way to Bardstown, Ky.

And chances are you’re dining in Mammy’s Kitchen.

Ah, Bardstown! If you have ever made the short trek out Bardstown Road to this charming little city to check in at the annual Bourbon Festival in September, you probably think of the place as a deep well of Kentucky nectar filled with tourists and traffic.

Of course, these are not bad things. “Deep well of Kentucky nectar” makes its own case; and Bardstown’s location in the epicenter of the Kentucky bourbon belt assures it a steady stream of tourists and the prosperity they provide.

And that’s without even considering such attractions as the Old Kentucky Home, the nearby Kentucky Railway Museum, and historic Roman Catholic landmarks including Gethsemani, the monastery where Thomas Merton once dwelt.

But Bardstown is worth getting to know even when there’s nothing special going on. Kentucky’s second-oldest city (after Harrodsburg), this leafy town of 12,000 boasts impressive streetscapes deeply rooted in the 1800s. Visualize an avenue lined with sturdy red-brick 19th century commercial buildings with cast-iron storefronts. Fill those spaces with shops, boutiques and eateries well-stocked with bourbon, and you’ve got, nope, not Frankfort Avenue, but the blocks of Bardstown’s North Third Street that frame the Nelson County Courthouse.

Here’s a quick look at three of my favorites. Since they are outside the Louisville Metro and my repeated visits have been more social than analytical, I won’t award ratings. But I can highly recommend all three.

Owner Christy Clark opened this popular spot with her mom and daughter in 2006 as a custom sewing store, antiques and accessory shop, with a café based in a back room kitchen almost as an afterthought. Before long, the popular café took over the show.

With its almost-life-size model of a Holstein cow in the front window and walls chockablock with knick-knacks, you might think you were in Bardstown’s branch of Lynn’s Paradise Café. The crowds that pack the place reinforce this effect.

But to be honest, the diner fare may be even better than Lynn’s, and the prices are easy on the wallet. I can offer unqualified support for omelets ($5.49 to $6.99), eggs Benedict ($7.99 with home fries), eggs with country ham ($7.99) and an exceptional pimento cheese sandwich on rye toast with gently spicy, sharp white cheddar ($3.99).

I believe I mentioned the bourbon tastings. That’s Bardstown.

Octavio, Luis and Jorge Salas found their way from Mexico to Florida’s orange groves to Lexington, Ky., where they opened the first Rincon Mexicano (“Mexican Song”) in 1992. Bardstown’s branch came later, and it’s perhaps the town’s most popular Mexican eatery.

The menu won’t be unfamiliar to anyone who’s dined in similar Mexican-accented restaurants in Louisville, but Rincon does it well, and adds a lovable touch of small-town hospitality. Everything on the menu but a few steaks and seafood dishes is under $10. I can testify to the chiles rellenos, enchiladas and bean burritos.

Dzevad and Merima Kreso and their three young daughters fled war-torn Bosnia about 15 years ago for life in the United States. Dzevad, who had been a chef and restaurateur as well as a onetime star on Bosnia’s national soccer team, soon found a job in a local eatery, and today he and his family own the place.

An expansive, stylish establishment, Kreso’s makes attractive re-use of the city’s old Arco Theater, with a banquet hall large enough to accommodate 400. The dining room boasts dark wood decor and white tablecloths, with a menu that includes tastes of Bosnia, Eastern Europe and the bluegrass. The bourbon list features some four-dozen entries, and there’s a decent short selection of draft and
bottled beer.

We enjoyed a crispy, tender Wiener Schnitzel ($16.95), a hearty and warming beef goulash over egg noodles ($14.95) and a well-constructed grilled portobello mushroom stuffed with spinach and feta cheese ($7.95). A slice of chocolate meringue pie went down fast to end
the meal.

If you go …
Bardstown is at the other end of Bardstown Road, also known as U.S. 31. It’s about 35 miles from my digs in Crescent Hill, but by the time I hit the Snyder Freeway in Fern Creek, I’m already halfway there. You can also drive out I-65 from Louisville to Clermont, Ky., then head east to Bardstown, but the Bardstown Road drive is just about as quick (about 50 minutes from my place), prettier, and you don’t have to share the road with many 18-wheelers.