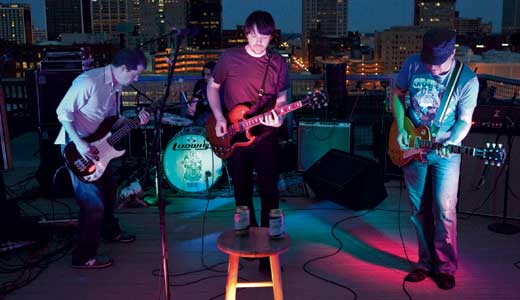 LEO asked Brian Gray to tell us about his hot band, The Hot Wires. They celebrate their new EP with a show at ZaZoo’s on Friday, Dec. 2, with Buffalo Killers and The Tunesmiths.

LEO: What’s the new EP called, and how did it come together?

Brian Gray: It’s called The Cockpit Fighter EP. We named it after an image of an old fighter plane sitting in a scrap yard that our drummer’s girlfriend found. It still looks badass even though it’s shot to hell and out of commission. As far as recording, my friend Donnie Bott offered to record us for free. So, of course, we said yes. His only stipulation was that he could only finish four songs for us. So, we got those done and decided to get ’em out there.

LEO: What kind of band would you say you are?

BG: I would say the Hot Wires are high energy rock ’n’ roll. When we were forming, I was in a serious MC5 rediscovery period. They were around right after the original rock ’n’ rollers and right before the punk movement. So, there was no real name for what they did, but high energy. I wanted a band like that.

LEO: You were a Legendary Shack*Shaker once upon a time. How did that compare to being a Hot Wire?

BG: I was actually an original Shack Shaker! I had never really played straight ahead rock ’n’ roll or rockabilly before that band, and it was like going to school. We never practiced, and Colonel JD would pretty much tell us what key the song was in and go. Either you jumped in or got left behind. And the Hot Wires is probably the closest band to them I’ve been in, as far as energy goes. But this band is so much more fun, honestly. I always felt like a hired gun then. This is much more passionate for me.