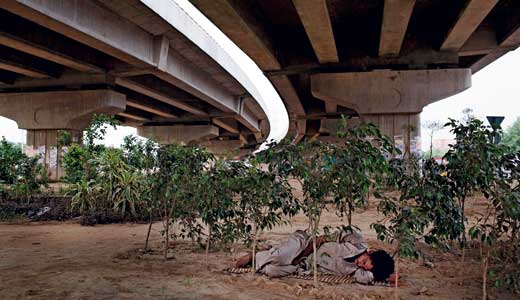 Digital snapshots pop into our lives constantly. Phones, computer screens, tablets — you name it, there is an onslaught of imagery. So, in an era of visual noise, what do we look for in an exhibition of street photography? How has photography as an art form changed? Dueling exhibitions at Galerie Hertz, “From Distant Streets” and “Streets: Near & Far,” bring two different and valid answers.

Twenty-nine photographers, including Richard Bram, who curated the show, are featured in “From Distant Streets.” Bram says the exhibition “shows that there is far more to be seen in our everyday surroundings than we usually imagine. What this exhibition does is show the wide range of what can be accomplished with straight photography, un-manipulated.”

In some respects, “From Distant Streets” celebrates what Henri Cartier-Bresson — arguably the father of street photography — termed “the decisive moment.” It’s the fraction of a second a photographer captures to create an image of significance — a photograph of an entire event in one still frame.

Yet one artist in “From Distant Streets,” Amani Willett, does use imaging software to create his work. Bram says Willett’s work “pushes the boundary between still photography and cinema: Here we see multiple views of people walking and pacing through the scene in an almost cinematic fashion. While these are obviously multiple exposures of the same person placed into a single frame, they are still ‘true.’ Are they real? Perhaps not. Are they true? I think so.”

But gazing around the room, it is difficult not to get pulled into the argument of what constitutes documentary photography. Digital technology, cropping and altering photos has never been easier. Is it possible to stand in a room filled with photographs and accept it as factual?

Just as New Journalism changed writing, giving a personal voice to nonfiction, it appears documentary image-makers are standing in a world overcrowded with images, forced to lean toward fine-art photography to set their photos apart. Possibly because of this, the best shots turn documentation into storytelling — composing and capturing stunning images representing a narrative.

And there are photographs doing this in “From Distant Streets”: the black-and-white shots of Kramer O’Neill, who photographed the same places at the same time for several months (if you like this idea and these photos, see the movie “Smoke”); color-saturated Coney Island shots by Mike Peters; an image of a teen holding center stage with a sno-cone by Bram; and Stephen McLaren’s shot of a reflective storefront, creating a mirror image of the bustle of a London street. Willett’s images are successful too, but if anything, his images attribute to the perception of photographs being unreal.

Another photo show, “Streets: Near & Far,” featuring the photographs of Jim Doiron, hangs in the back gallery of Hertz. The images stand in opposition to “From Distant Streets.” They are close-ups of cracks and faults in cement and walls. Manmade materials made to endure traffic and weather, yet they appear fragile as their imperfections are highlighted. No people or size references are represented, taking the mass of the material away. The images are painterly, and the prints float an inch or two off the wall on metal pins.

“It is my intention to show the fragility of materials that are not supposed to have such qualities,” Doiron explains. “Specifically, I am interested in the cracking as the initiation for further destruction. The crack is usually caused by an inherent instability but allows for the infiltration of water, splitting things further with freezing and thawing. It’s the simple yet powerful potential that this small flaw has in an otherwise solid mass that interests me.”

Doiron’s work feels processed and slow, moments to be meditated on rather than captured. The room is relaxed and still, suggesting less is more. And although the work is different in every way, it’s aesthetic suggests maybe “From Distant Streets” could have pulled back as well.

Whether you prefer the captured motion of “From Distant Streets” or the still abstractions of “Streets: Near & Far,” what can’t be denied is how we understand pictures — and image-making — is changing. Exhibitions like the two at Hertz are an opportunity to step back from the flood of images in our daily lives and value photography as a skilled practice. And maybe, having an insight into the sightline of a trained eye, we are better equipped to be aware of our own surroundings. Slow down. Appreciate life frame by frame.