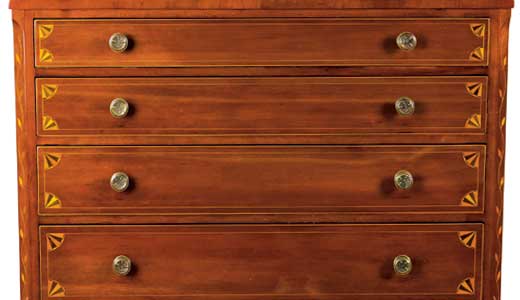 Rainy days are meant for being indoors. Choose your location wisely if given the chance. One recent heavy downpour presented me with the opportunity to spend an afternoon at the Speed Art Museum. The museum has four temporary exhibitions on display: “Minimalism: Now/Then/Again” (through spring), “Howard Hodgkin Prints and Process” (through Feb. 26), “Kentucky Antiques from the Noe Collection” (through Feb. 5) and “Willie Doherty: Traces” (through Jan. 1).

Frank Stella’s “Chocorua II” is homage to the abstract artist most credited with starting Minimalism. The composition is simple — geometric shapes in bright colors. From this he managed to create a series of 11 paintings in the 1960s he dubbed the “Irregular Polygons” that plays with our innate ability to see more than is there. “There’s a very shallow type of illusion going on in ‘Chocorua,’” Stella explains. “But once you’re committed to doing this in three-dimensions, then it really would be a pyramid inside a cube.”

I was unfamiliar with British printmaker and painter Howard Hodgkin before viewing his show. “Howard Hodgkin Prints and Process” illustrates how he makes his prints resemble his paintings, right down to the brushstrokes. He achieves this effect with an elaborate printmaking process he experimented with and perfected in the 1980s.

The result is highly effective, especially in “Frost.” If I run across his work in the future, I doubt I would be able to tell immediately if it’s a painting or print, although some of the effect is lost with his disinterest in framing.

Early Kentucky furniture, ceramics and textiles are on display in “Kentucky Antiques from the Noe Collection: A Gift to the Commonwealth.” Lancaster, Ky., residents Bob and Norma Noe’s need for furnishings on a newlywed’s budget eventually turned into a lifelong passion. Over time living with their acquisitions, they became studied collectors, seeking out the best 19th century art and crafts Kentucky had to offer. “There is an emotional reason for collecting Kentucky objects,” Bob Noe says. “We are Kentuckians … and very few people were collecting it at the time, so we decided to become Kentucky collectors … (There’s) a connection with the state that goes much deeper than just collecting antiques.”

The 119 items on display have been donated to the Speed, more than doubling their holdings of early Kentucky art. A large portion of that is superbly crafted wood furniture.

“Willie Doherty: Traces” has been discussed previously in LEO Weekly (Oct. 5 & 26), but the exhibition is worthy of another mention. “I totally believe, heart and soul, that Willie Doherty produces work that is truly profound, important and necessary,” says Suzanne Weaver, curator of contemporary art. “I hope many people will come back more than once, spending time with the work …” His photographs, and especially the videos, put you in a moody “Twin Peaks” frame of mind and are a guaranteed conversation-starter.