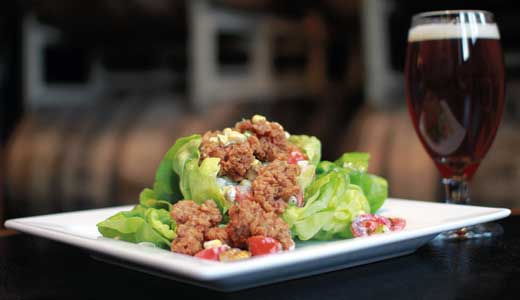 Hey, let’s go get a beer! And some pulled pork! And … some vegan wings made out of seitan?

Beer and barbecue make a natural pair, and Against The Grain Brewery and Smokehouse does both admirably. But add some really good vegetarian dishes to this mix, and you’ve got something quite out of the ordinary.

This recent arrival in the old Browning’s space is staffed with a strong team, most of whom moved over here from Bluegrass Brewing Co. It’s been drawing enthusiastic crowds since it opened Oct. 4, taking over the purpose-built microbrewery in
Slugger Field.

Co-chef Reid Johnson comes from BBC, too; he’s joined here by co-chef Akeem Hasegawa in laying out an eclectic menu that blends carnivorous fare — much of it skillfully smoked on the premises — with imaginative vegetarian and vegan treats.

They haven’t changed Browning’s venue much, moving things around a bit and adding an eye-catching graphic that depicts the brewing process. The imposing, glass-walled brewing equipment with its stylish re-use of the 19th century Brinly-Hardy train shed needed no alteration to serve as one of the city’s more evocative brewpub spaces.

But on a beautiful autumn afternoon, Mary and I and our friend Sarah chose the al fresco option, enjoying the breeze and watching Main Street traffic roll by.

Against the Grain features full bar service including a short but nicely chosen wine list, a good selection of bourbon and other liquors, and some intriguing cocktails. I also noticed LEO’s Bar Belle sampling those, but that’s another story that I’m sure she will tell.

But this place is all about beer, and our knowledgeable server gave us the full spiel: The brewers will make new beers with every batch and do not plan to repeat themselves, so if you enjoy one, take home a growler. You will not see it again. There will, however, always be one in each of six tasty categories (“hop,” “smoke,” “dark,” “malt,” “session” and “whim”), ranging from lightweight but flavorful “session” beers to hearty high-gravity drinks that can prompt a post-prandial call to CityScoot.

Sarah went for the sampler, offering six small glasses lined up on a wooden board. Mary chose Covalent Blonde, a floral Belgian-style “session” beer, and I started with smoky Ledersmoken, reminiscent of Bamberg’s finest, then moved on to the Guinness-like 35K dark milk stout — so named for winning a $35,000 prize in competition. All were first-rate, more than competitive even by the lofty standards of Louisville’s outstanding craft beer scene.

The menu offers a wide range of creatively imagined dishes, many using locally grown produce. Surprisingly, among the starters, small plates and salads, vegan and vegetarian dishes outnumber the meatful options by nine to two. There’s no need for carnivores to steer clear, though, as such veggie goodies as smoked beer cheese with BBQ kettle chips ($6) and smoked red pepper hummus with pita ($8) have broad appeal. For the unrepentant, there’s always pulled pork nachos ($9) and fried chicken liver salad ($9).

The lion’s share (term chosen advisedly) of the sandwiches and entrees, conversely, are made for meat eaters, ranging in price from $12 (for catfish fingers) to $17 (for pan-seared duck breast). Tacos ($12) come stuffed with your choice of smoked beef, pork or tofu. There’s pulled pork made from pigmeat ($9), or pulled “pork” made from tempeh, a soy product.

Vegan “wings” ($8) were dark, crispy-spicy fried objects with a chicken-like texture, made from seitan, or wheat gluten. They were served with shredded celery as garnish and local honey for dipping. Did they taste like chicken? Well, not exactly, but I’m not sure I could have told seitan from bird if I wasn’t paying attention.

Onion rings ($8) were a winning presentation, but we caught the fry chef napping; this batch was greasy on the outside, soggy within. Sarah’s chicken liver salad ($9) tasted as good as it looked, four fried liver nuggets (a bit shy for a dinner salad, she thought) tossed with corn kernels, tomatoes and cucumber in a creamy dressing piled into a leaf lettuce basket.

Mary was happy with her beer-can chicken ($14), half of a free-range hen, juicy and tender enough to eat with a spoon, served on garlicky horseradish mashed potatoes with simple but fresh green beans.

The sprout burger ($10) was a veggie alternative too offbeat not to try. Looks like beef! Tastes like sprouts, quinoa and peanut butter, its actual components. Still, it was nutritious and filling, with a good flavor all its own. Perch it on an eggy challah bun, dress it with lettuce, tomato and onion and a dab of Grey Poupon, and it was an estimable … burger?

A dessert special, a pear poached in Belgian-style beer and artfully arranged around smoked grapes and cinnamon whipped cream, was pretty good, but a little too fancy for this scene. Still, we cleaned the plate.