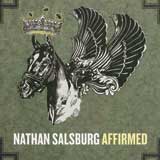 Nathan Salsburg spends so much time preserving and magnifying the past that it’s easy to forget the goals he achieves with his own songwriting. Affirmed is a largely instrumental detour into breezy finger picking and equine-themed nostalgia. “Sought & Hidden” and “New Bold Ruler’s Joy” roll like the fields of Calumet. Occasionally, his mood swings to fit the moment, be it a thoughtful waltz (“Back Home in Bogenbrook”) or reverential strum, as on “Blues For Eight Belles.” One of two songs to reference the deceased Derby contender, “Blues” is practically the soundtrack to Eight Belles’ final race on May 3, 2008. Salsburg gradually includes more ominous chord changes until he abruptly cuts them off, ending the piece on a funereal tone. By comparison, “Eight Belles Dreamt The Devil Was Dead” is a hopeful sigh imagining the horse at peace in the afterlife. Toward the end of the record, Salsburg delves once more into the realm of loss by covering Shirley Collins’ “The False True Love,” before closing out Affirmed as comfortably as a horseback ride.