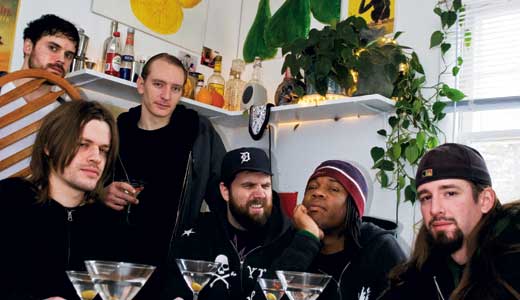 LEO: I have to ask about the name, of course. I hear a lot of band names, and this has to be one of the best. What kind of reactions do you get?

Aaron Coleman: The reaction we usually get is, “That is the best name I have ever heard.” Which really, in a way, sorta helps us in certain situations.

LEO: What are the essential differences between punk, thrash and other forms of metal, as they inspire you?

AC: Punk to me is more or less a way of life, which creates its own sound, which then meshes with the style of metal and thrash music. We all have different influences that seem to mesh together with what we are doing musically.

LEO: Have you ever had any singer problems?

AC: You know, I wouldn’t say problems … maybe differences. Our original singer was great. Good stage presence, good voice, all those qualities you want from your frontman/singer. We were doing a lot of shows and touring during ’06-07. Sometimes, people’s goals and aspirations change. That is what happened with our original singer after we got home from those two years of touring constantly. He decided to leave the group and go his own way, which was cool with us. However, that left us without a singer for a few years

LEO: What inspires your songs?

AC: Just the everyday things we experience and things from our past that have affected us, and the people around us. We have our own individual musical influences that seem to find their way into our music writing. Of course, we are influenced by punk and metal music, but we are also influenced by hip-hop, reggae, oldies, jazz, classical, straight-up rock ’n’ roll, ska, and everything else under the sun.

LEO: How many guitars is too many?

LEO: Is punk dead? Does it just smell bad?

AC: The true art form of punk is still very much alive. People might think it’s dead, because of all these “pop-punk” bands that have come out over the years and the sub-genres of labels punk music has been given, but I don’t think it’s dead. There’s a lot of good unsigned punk bands out there that are keeping the true meaning of punk going. As far as it smelling bad? Yeah — in our van after the third day out on the road.

Coke Dick Motorcycle Awesome with The Slagsmiths and The Fisticuffs