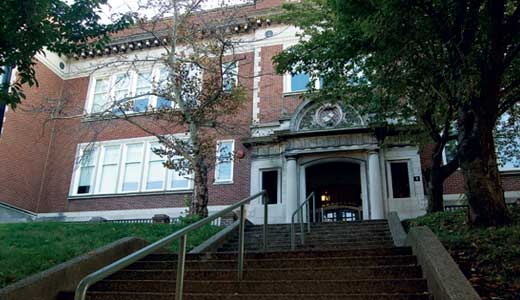 Deaji and Toreze are children. As tales unfold of living in a neighborhood known as “The Jungle,” of facing danger and even death there, and of committing crimes that tough circumstances breed, that fact remains clear.

Both 16-year-olds are under 5-foot-6, and their answers to yes or no questions during a recent interview end in “ma’am.” Their more elaborate answers are concise. They slouch. They fidget, as boys tend to do when asked to sit still for 30 minutes or more.

Their skin is weathered with the stress of lives more difficult than children deserve to face. For sure, they each have a tough skin; survival in their neighborhood demands it. But they maintain goals children their age are expected to have.

Because of their respective juvenile records, Deaji and Toreze have spent a portion of their high school years at alternative schools within Jefferson County Public Schools.

The JCPS website boasts a total of 26 “special schools,” including Youth Performing Arts School, Ahrens Educational Resource Center, and 11 residential and non-residential state agencies for which JCPS provides teachers. In general, high school students with a history of behavior infractions attend one of the state agencies or Breckinridge or Buechel Metropolitan high schools.

Even for the most serious offenses (i.e., assault, weapons violations, bomb threats, illegal substance possession or distribution), the JCPS Code of Acceptable Behavior and Discipline and the Student Bill of Rights gives school administrators a wide range of disciplinary options including in-school suspension, recommendation for placement in an alternative school or, ultimately, expulsion.

Expulsion proceedings are a last resort — and extremely rare. In fact, Jack Jacobs, executive director of student assignment, health and safety at JCPS, cannot recall a single student being expelled in his 39 years with the district.

“We don’t try to close the gate on students,” Jacobs says. “We try to give them the help they need.”

The help comes in the form of schools that provide more individual attention and structure than any of JCPS’s 21 regular, or A1, high schools can provide. Jacobs started Breckinridge in 2000 after seeing a need for a transition point between juvenile detention and enrollment in an A1 school. Today, students may go there with or without a referral from the juvenile justice system. Buechel has served a similar function since the 1970s.

In the 2010-2011 academic year, 886 students attended Buechel or Breckinridge at some point.

Class sizes are limited to 10 to 14 students in Buechel and Breckinridge, which means teachers can provide youth with more individual attention, and students see results faster and have a stronger bond with staff, Jacobs says. As a result, the district spends more money per child at alternative schools.

All supplies — textbooks, pencils, paper, etc. — are in the classroom when students arrive, in part because it prevents students from not participating when they forget essential materials and also because safety demands that they not bring book bags.

There are intensive social and life skills programs available, extra counseling, and drug and alcohol abuse classes. Social workers and therapists from state agencies or major nonprofits, like Seven Counties, partner with JCPS to offer the additional services.

Deaji attended Buechel Metropolitan High for two trimesters during the 2010-2011 school year. He then enrolled at Waggener, where he returned this fall.

Early in his sophomore year, he arrived at Doss High School under the influence of marijuana, then sold a bag of weed to another student, who got caught. Deaji might have avoided arrest had he implicated another student, but he refused and pleaded guilty to trafficking charges.

Although Buechel was rough at times — Deaji says kids would get beaten up for “running their mouths” — he says it was more or less “just like a regular school.”

The curriculum was similar to what it was at Doss, he says, but the work was easier. According to Deaji, that’s in part because the classes were smaller and there was more help available, but also because “they probably didn’t think we could do regular work.”

But Deaji doesn’t seem insulted by any presumptions, and he found that easier workload had a benefit: It helped him raise his GPA, which could help him achieve his goal of going to college.

“I want to have options on how to live my life,” Deaji says. Both he and Toreze want to be entrepreneurs.

Toreze has been enrolled in Louisville Day Treatment, one of the 11 aforementioned state agencies, since May of this year. He fired a gun after a party in December 2010, during JCPS’s winter break. He went to juvenile court and returned to Waggener, his A1 school, in January.

About one week into the semester, however, school officials learned of the incident and deemed him a threat to other students. He was ordered by a court to get his GED, but he wanted to graduate with a diploma. He couldn’t attend any school until his parole officer got him into Louisville Day Treatment.

He likes Louisville Day Treatment but feels like he was somewhat “thrown away” at Waggener. “They could’ve at least tried to keep me in the same school,” he says.

Toreze describes his new school as more strict on absenteeism. “Since you’re on probation, you really can’t get into too much trouble, or else they can lock you back up.”

The same is true at Buechel and Breckinridge; some 42 students from Breckinridge and 64 from Buechel had returned to Louisville Metro Youth Corrections by the end of the 2010-2011 school year.

Toreze agrees his current curriculum is easier, again because the class sizes are smaller — the all-boys facility had only three students last year — and because teachers provide more individual instruction.

He feels like he has good relationships with the staff. “They talk to you, ask questions about what’s going on at home.”

Despite the obstacles they’ve faced, college is not out of the question for either Toreze or Deaji. According to the Student Tracker Report, a service provided by National Student Clearinghouse to track college attendance, seven out of the eight students in the Louisville Day Treatment’s class of 2009 had enrolled in college within one year of graduating from high school, and all of them returned for their sophomore year.

Out of 41 students in Buechel’s class of 2010, nine enrolled in college, as did three of the 17 students in the class of 2009. Of those three, two returned for a second year.

Those statistics are why Jacobs hopes to expand the alternative schools program to meet the needs of more students.

Still, these alternative schools are not without critics. Local youth activist Eddie L. Woods is concerned about what he calls the “physical management” of students and about the difficulty in getting them back into A1 schools. Woods is executive director of LIFE Hope Center Inc., a nonprofit that serves troubled youth.

He also would like to see JCPS take more interest in community initiatives equipped to deal with the problems that schools are not made to handle. Students’ success “depends on their support network outside,” Woods says. That’s where organizations like the LIFE Hope Center come into play. Both Deaji and Toreze participate in LIFE Hope’s programs. Both want to go to college, to which Woods says, “We’ll get them there.”