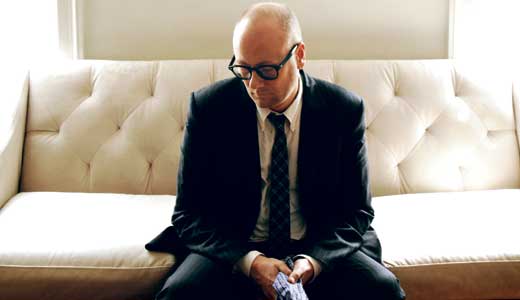 Mike Doughty led Soul Coughing to some alterna-success in the ’90s and, after beating substance abuse problems, has had some more relative success as a solo artist in the new century. His memoir, “The Book of Drugs,” will be released in February.

LEO: When you released your second album, Golden Delicious, in 2008, you said, “Every time I put out a record, the audience seems to like what I did two years ago better.” Do you get frustrated with having to cater to the fans?
Mike Doughty: What compels me about any kind of art is something that emanates from the artists’ personality, style, her or his obsessions. For instance, I’m a huge Bon Iver fan, but if dudeman decided to write string quartets, I’d be more interested in hearing that than “Blood Bank,” probably my fave song of his. A portion of my mind was heading in the direction of Sad Man Happy Man, so it wasn’t a total mersh move. You have to listen to your crowd, because you’re fundamentally working for them, but to create work you dislike out of a sense of obligation makes for shitty music. I do my best to never put out songs that I don’t love.

LEO: You’ve said that you try to make music you want to listen to, “something (you) can listen to on the subway on headphones and really dig.” Do you listen to your own music often?
MD: When I finish an album, I love it, and I listen to it a lot. Then eventually, as I play the songs live more and more, they begin to change ever so slightly. Then when I go back to listen to it, the recording sounds strange, almost distant.

LEO: Tell me about your new electronica album, Dubious Luxury, which you described as “psychedelic dance music.” Have you since tried a chemically enhanced listening experience?
MD: Nah, I’m out of the hallucinogens circuit. Very much hoping hallucinogen-enthusiasts discover the album. I think they might find it very effective.

LEO: You describe it as “an appetizer to the singing/songing album Yes and Also Yes.” How do the two albums relate?
MD: Other than the release dates, they really don’t. Dubious Luxury is about two years old. I’d been waiting for the right moment to put it out for a long time, then I realized that there would never be a right moment. Is there ever a right moment for anything?

LEO: What’s your writing process like?
MD: I accumulate stuff in a notebook. It could be weird words I see in a novel, stuff I overhear, stuff from pop culture, from newspapers, or stuff that randomly pops into my consciousness. There’s a separate process of brainstorming rhythms, riffs, chord progressions and melodies. At some point, I put the two together. They’re parallel processes. I have a room in my apartment with all the instruments in it, that’s where I usually work. When I’m writing electronic stuff, I can do it with a laptop and headphones anyway. Sometimes working in the kitchen can be oddly focusing.