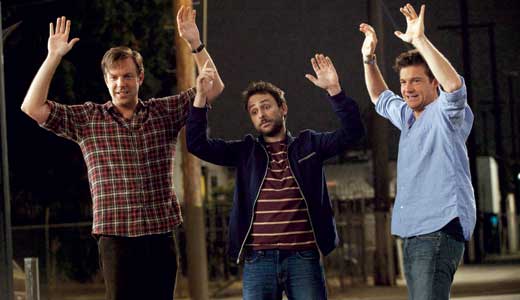 Three average schmucks make a pact to kill the others’ bosses in this fun and funny, silly bit o’ fluff. But what makes it really work is the cast, with Jason Bateman, Jason Sudeikis and Charlie Day as the schmucks and Kevin Spacey, Colin Farrell and Jennifer Aniston having way too much fun as their crazed superiors. Throw in Donald Sutherland and Jamie Foxx for good measure, and you have one of the best guilty pleasures in recent years. Highly recommended.

Samuel L. Jackson proves once again that he’ll work in anything as he stars alongside Nina Dobrev from “The Vampire Diaries” as a reluctant warrior forced to fight for his life in online armed gladiator combat.

A pair of delicious and little-known horror flicks sold as the “Dimension Extreme Double Feature.” The first is a no-budget regional production from Florida that excels in loving, over-the-top gore and action. But “Black Sheep” is the real gem: A clever ode to Peter Jackson’s early work in New Zealand about a farm that invents bio-engineered sheep that not only have a taste for human flesh, but turn their victims into sheep-human zombies! This thing is a major hoot. Recommended.

Just in time for Halloween, Shout! Factory is releasing all 81 Paramount Studios Casper cartoons in a nice, cheap boxed set. Made between 1945 and 1963, Casper was the first politically correct cartoon character, famous for wanting to make friends instead of scare people. This set contains all of his popular movie theater shorts, as well as the much-loved TV series, which began in 1950.

IT TAKES A THIEF: THE COMPLETE SERIES

The first full-series release of this seminal ’60s hit. Robert Wagner stars as Alexander Mundy, the world’s greatest cat burglar. When he finally gets caught, to avoid rotting in prison he agrees to serve his country as a thief/spy. Filled with romance, intrigue, great guest stars and fun tricks of the burglar’s trade (it’s where we learned to shoplift — really!), it was a major hit that lasted three seasons.

Finally available on DVD and Blu-ray, the seminal drama of the dark side of American culture in the late ’50s. Despite unrivaled prosperity, Americans undergo unexpected societal growing pains: An unrepentant prostitute (beautiful Jennifer Jason Leigh) falls in love with one of her clients; a family struggles to learn that their teenage daughter is pregnant; and a violent union organizer discovers he is gay.

A pair of documentary filmmakers stumble upon Earth’s biggest secret: There are people on the moon, they’re from the future, and they’re running our government! Not the greatest movie ever made, but a good, solid shot of that rarest of things nowadays: real sci-fi. Everyone should see this little no-budget indie treasure with more good ideas than a flock of big-budget studio productions.

Back in 2006, this infamously depraved sitcom/sketch-comedy series shocked the British Isles for one season and was never shown — or mentioned — again. Matt Berry (“The IT Crowd”) and Rich Fulcher (“The Sarah Silverman Program”) play a pair of hangmen who muddle through lives filled with bad first dates, time travel, sex, violence, booze and toe-tapping musical numbers. Vulgar to the extreme and damn proud of it. Our kind of stuff!

If you’re as big a “Brady Bunch” fan as we are, then this episode of “Celebrity Bowling” will be right up your alley. Greg, Marsha, Peter, Jan, Cindy and Bobby all take turns knockin’ ’em down for charity. Man, we need a life …

A.E.W. Mason’s classic adventure novel set during the British Empire’s excursions in Africa has been filmed a score of times, but never better than this. A young British officer is branded a coward and fights to restore his honor in the eyes of his men and his friends. It’s the adventure of a lifetime, filmed in breathtaking Technicolor and featuring a thunderous, epic score. Now available on Blu-ray from the Criterion Collection.

THE PENGUINS OF MADAGASCAR: THE ALL-NIGHTER BEFORE CHRISTMAS

From the Nickelodeon Channel’s “Madagascar” spin-off comes this musical tale of a wacky Christmas celebration at the zoo, with each group of animals having a part to play amid havoc and mayhem. As they say, “It ain’t perfect, but it’s Christmas.”

From the Investigation Discovery channel comes this dramatized cop-doc of the Canadian hunt for one of the world’s most notorious serial killers, Robert “Willy” Pickton. Despite being rather conspicuous and uneducated, he is believed to be responsible for the torture-deaths of 49 women.

THE TREE OF LIFE

Terrence Malick’s (“Days of Heaven,” “The New World”) latest artsy tome features Sean Penn as a man in 1950s Texas who seems lost and alone. Through flashbacks he remembers his abusive father (Brad Pitt) and angelic mother (Jessica Chastain). Somehow this all poetically entangles us in the Big Bang and the eternal war between man’s perceived grace and the eternity of nature. Or something like that.

Pronounced “Vahgner,” this is a famous English/Hungarian co-produced TV miniseries starring Richard Burton, Vanessa Redgrave and Laurence Olivier, which has never been seen on these shores. Famous for composing “Der Ring Des Nibelungen,” Richard Wagner lived an amazing life that included fighting in the 1848 German Revolution and years in impoverished exile in Switzerland. Good, but for period-costume drama freaks only.