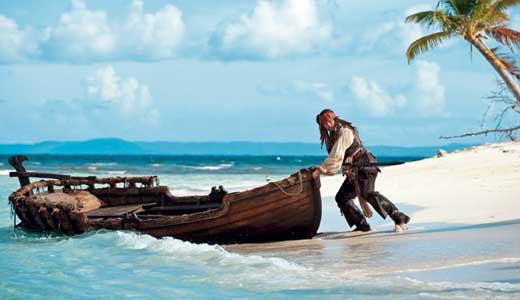 Pirates of the Caribbean

Cameron Diaz owns this low-rent comedy from the director of “Walk Hard,” and that’s a good thing. She’s crass, loud, pissed, drunk and recently dumped by her asshole boyfriend, so she declares war on life, starting with her job and all those wretched, snotty little middle-schoolers she has to teach. So much potential! But the movie only delivers about half of the mayhem you expect, largely due to a script that’s just not up to the quality of the cast. Still, a bit of skeezy fun with Justin Timberlake, Jason Segel, Lucy Punch and Molly Shannon.

PIRATES OF THE CARIBBEAN: ON STRANGER TIDES

Johnny Depp takes another march through Cap’n Jack Sparrow, this time for director Rob Marshall (Gore Verbinski having jumped ship) with comely Penélope Cruz in tow. Definitely the weakest of the franchise, though not without its charms — including the finger-picked fireworks of Rodrigo y Gabriela on the soundtrack. Plot? Dunno. Something about Blackbeard, the Fountain of Youth, zombie pirates and lethal mermaids, but who really cares? It’s all just a big ol’ excuse to munch popcorn and ogle Astrid Bergès-Frisbey’s half-nekkid piscine temptress! Fun.

A deep, emotional and nuanced indie drama about a good-hearted Mexican raising a family while working illegally in L.A. His belief that hard work and high morals will lead them all from wretched poverty is derailed when someone steals the decrepit landscaping truck of his friend/employer.

If you are a fan of “parkour,” that thrilling urban gymnastic/running sport seen in the opening of Daniel Craig’s “Casino Royale,” you’ll love this. Sean Faris literally runs for his life when a mobster straps exploding collars on him and a pack of baddies, and only the first one to cross the finish line will survive. Fast dumb fun.

A far-better-than-usual spooker from the “paranormal TV show investigators find real horrors when locked inside a haunted, abandoned psychiatric hospital” genre. A first-class, grab-your-date-and-scream-your-lungs-out good time. Worth checking out.

OK, right up front: Compared to, say, “Iron Man” or “Batman Begins,” this doesn’t seem very good. But if you go into it expecting a simple good time, a comic-book tale suitable for a 10-year-old boy, then you’ll enjoy it, and that’s largely because of Ryan Reynolds. He plays the recipient of a cosmic ring of power, making him a protector of the universe, part of an intergalatic army fighting an unholy evil. Director Martin Campbell’s cartoony special effects only distract from the talent on the screen, including such heavy hitters as Blake Lively, Peter Sarsgaard, Mark Strong, Angela Bassett and Tim Robbins. Still, a fun little flick; worth your time.

A pair of winter-themed Peanuts offerings to get you in the mood for cold weather. Includes the entire TV special “She’s a Good Skate, Charlie Brown,” plus an episode of “The Charlie Brown and Snoopy” TV show.

From the Discovery Channel’s “Mutant Planet” series, this is neither a natural history doc nor a science lesson, but an intelligent and eon-spanning fusion of both to create something singular and new. Exotic and beautiful creatures are shown from far-off locales; then the viewer takes a ride back in time to see how the simplest things guided their evolution into the creatures we see today. Excellent.

All three generations — Macross, The Masters and the New Generation — in one 17-disc set of 85 half-hour episodes, all fully remastered, plus another 10 hours of bonus goodies. One of the most influential and successful of the Japanese imports, it began in 1985 with the tale of an alien spacecraft crash-landing on Earth, revealing to mankind a new technology which we immediately put to use in war.

It is beyond our bowl-swirling talents to properly explain this insane, hallucinatory and ravishingly beautiful indie, so we just stole something off the Internet. A stylish and original vampire tale — no, wait, come back! — about a volunteer semi-vampire slave who does unspeakable things in service of his bloodsucking master, but is beginning to feel remorse after decades of life. A fresh, unique and horrifying take on the undead from France, largely filmed in L.A.

Supposedly a reboot of Joe Dante’s 1981 werewolf masterpiece, which featured groundbreaking special effects by Rick Baker and Rob Bottin. This one stars Landon Liboiron of “Terra Nova” and traffic-stopping sweety Lindsey Shaw of “Pretty Little Liars,” but it has absolutely nothing to do with the Dante film as far as we can tell. Ask for the original.

An arthouse favorite from Spain about a pair of clowns, one Happy, one Sad, who become stars of a shocking and fantastic world. The brutal Happy Clown mistreats his acrobat wife, whom the Sad Clown secretly loves. Filled with humiliation, bloody violence, absurdity, nudity and rough sex, this is not a film for the squeamish, but it is powerful, affecting and unforgettable.

A gay rom-com that seems to revel in bending Hollywood’s formula for straight romantic comedies. Jon Prescott has the perfect life: great parents, a good job and hot fiancée Margaret Anne Florence, but privately he is unfulfilled. Then, over drinks, his old college chum reveals that he is gay, and everything changes. Handled with refreshing humor and aplomb.