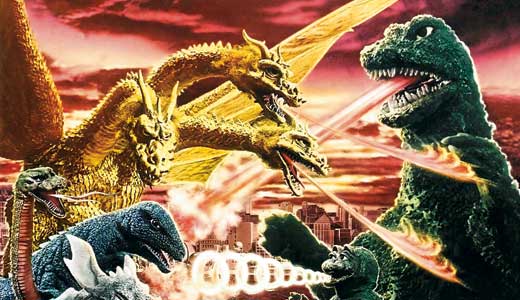 Blu-ray release of a true high-water mark in “guy in a rubber suit” monster-moviemaking. Evil space aliens The Kilaaks release all the giant monsters from Monster Island to crush Earth’s major cities. Only the daring crew of the super rocket ship X-2 can save us! Stars Godzilla, Rodan and King Ghidra with cameos by Mothra, Angilas, Minya (baby Godzilla), Spiega (aka Kumonga), Baragon, Gorosaurus, Manda and Varan — a record 11 monsters! Directed by Ishirô Honda (natch), with “thum thum thum” music by Akira Ifukube.

This little sci-fi/horror masterpiece slipped out of Hollywood just days before the abominable Hayes Code put the kibosh on cinematic sex and violence for a generation. Charles Laughton stars in a brutal telling of H.G. Wells’ novel, “The Island of Dr. Moreau,” as the mad doc who surgically transforms jungle beasts into two-legged “not men.” Directed by Erle Kenton (“House of Frankenstein”), the special makeup effects and savage ending gave us nightmares for years. Co-stars Bela Lugosi as “Sayer of the Law”; now available in Blu-ray with some of the best Criterion bonus goodies ever. A must-own.

One of the greatest sitcoms ever made, now in one 25-disc set with great bonus goodies! Hal Linden starred as the harried but very human captain of New York’s 12th Precinct Greenwich Village police station in 1974. Assisting him were Detectives Wojciehowicz (Max Gail), Harris (Ron Glass), Dietrich (Steve Landesberg), Fish (Abe Vigoda) and Nick Yemana (Jack Soo) — as fine a cast of character actors as was ever assembled. Crackling scripts, most by Danny Arnold, and brilliant direction by Noam Pitlik combined to make this one of the most popular and successful TV shows of all time. A bit pricey, but a must-own!

Another odiferous offering from the irrepressible Charles Band and his lads at Full Moon Entertainment. Five hot girls decide to convert an old, haunted mansion into a killer Halloween attraction. What could possibly go wrong? This is the sequel to 1999’s tale of a perverse scientist who turns a homeless guy’s disembodied eyeball into a giant killing machine with a fondness for nekkid women. Of course it makes no sense! That’s what’s so much fun!

An impressive assembly of animated shorts from around the world that we guarantee will blow your mind! From stop-motion (a box of matches falls in love with a lit cigarette) to hand-drawn (a Chinese monk takes a walk with a tiger, all in silhouette) to computer-rendered (a futuristic take on “Tom and Jerry”), these are 10 of the very best we have ever seen. Highly recommended.

THE ART OF FILMMAKING

This wonderfully provocative (hell, it’s damn-near sleazy) flick upset a lot of people back in 1974. Angel Tompkins, then star of daytime soap “General Hospital,” plays a high-school teacher who has on-screen sex with her star pupil … Jay North, TV’s “Dennis The Menace.” From there, the plot shifts focus to mental patient Anthony James’ murderous involvement. Pretty bad, even by our standards, but entertaining as only ’70s drive-in features can be.

The great-granddaddy of all John le Carre Limey spy dramas, starring Alec Guinness as George Smiley. This is BBC drama at its absolute best, with a world-weary and fragile-looking Obi-Wan called reluctantly back to service to ferret out a Russian spy within the British secret service. Quietly paced, almost suffocating at times if not for Guinness’ brilliant performance, it is nonetheless a deadly game of wits. This is how you fight a Cold War.

In 1974, the 46th Academy Awards ceremony was being broadcast live when the unthinkable happened — they got streaked! This doc reveals the life of Robert Opel, the man who ran bare-assed across TV screens in front of David Niven. A gallery owner from San Francisco, he was one of the first openly gay political activists and social disobedients until his murder in 1979.

Similar in tone to many old great Hammer films, this tells the tale of three city dwellers who are invited to a birthday party on a remote island in Britain where the locals have evolved their own twisted morality. By nightfall, there’s no way to get off the island. Alive, that is.

For opera junkies only: An 11-disc, 15-plus-hour presentation of Richard Wagner’s epic tale of Siegfried and Brünnhilde from the Bayreuth Festspiele in 1991. Also available: the somewhat shorter Bugs Bunny version, “What’s Opera, Doc?”; part of the “Looney Tunes: Golden Collection, Vol. 2” for $64.95. The latter is a much better deal.