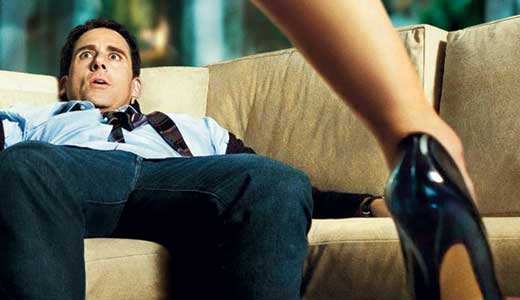 Disney/Pixar returns once again to Radiator Springs and the auto-anthromorphic crew that made “Cars” so much fun. But instead of taking the easy road, rolling again down Route 66, they head for Highway 007, running afoul of espionage and Euro-trash intrigue with help from Eddie Izzard, Michael Caine and Emily Mortimer. While it doesn’t have the impact of the original, the filmmakers ratchet up the fun factor by spoofing the Queen Mum, sumo wrestling and the streets of Tokyo, London and Paris. Also in Blu-ray 3-D.

A big ol’ pile of funnymen and women gang up on romance to great effect thanks to a knowing script from Dan Fogelman (“Tangled”). Steve Carell finally gets a movie worth his talents when supposedly happy wife Julianne Moore suddenly demands a divorce. His bud Ryan Gosling comes to the rescue, guiding the unprepared Carell into dating hell where they meet Marisa Tomei and Emma Stone. The cast chemistry harkens back to the days of Cary Grant and Audrey Hepburn, making this one of the best — and funniest — date flicks to date. Recommended.

The perfect Christmas gift for the ’rents — or anyone who loves classic TV and great rock ’n’ roll! A two-disc set from “The Ed Sullivan Show” — broadcast live, of course — from 1964 to 1969 featuring 17 performances of the Stones, as well as Topo Gigio, Leslie Uggams, Dusty Springfield, The Muppets, Louis Armstrong, Red Skelton, Flip Wilson, Rodney Dangerfield and much more! Includes the infamously sanitized “Let’s Spend Some Time Together” version of “Let’s Spend The Night Together.”

If you’ve never seen a Boston Blackie flick, here’s a great introduction. There were 22 of these thief-turned-gumshoe mysteries going back to 1918, but the best 14 starred Chester Morris. Here Morris and his sidekick, “The Runt,” are accused of killing a laundry owner in Chinatown. Breezy fun.

Jeremy Irons became an overnight star thank to this TV sensation. He plays a former Army captain who comes to the home of a friend to while away some time and ruminate on the state of his life. Little does he know that this scene of pampered aristocracy will include the doomed Sebastian (Anthony Andrews) and the rest of his crazed family. Nearly 11 hours of great drama and humor with Laurence Olivier, Claire Bloom and John Gielgud.

HOAX FOR THE HOLIDAYS

A timely Canadian indie dramedy about a bored teen who makes a coffee smudge of Jesus on a donut shop wall. It is, of course, immediately hailed as a miracle. Aka “Faith, Fraud and Minimum Wage.”

True story: In 1964, author Ken Kesey (“One Flew Over the Cuckoo’s Nest”) dropped acid and drove cross-country to the New York World’s Fair with a group of similarly stoned buds. These Merry Pranksters — including Neal Cassady, subject of Jack Kerouac’s “On the Road” — recorded the trip on a wind-up 16MM camera, intending to make a documentary. That movie was never made, but now a pair of Oscar-winning directors have recovered this amazing footage into a time capsule of American cultural history.

A terrific doc on Joyce McKinney. A former Miss Wyoming, it seems Joyce is just plain crazy. The buxom blonde, who posed nude for a number of men’s magazines, including some serious S&M bondage rags, kidnapped Morman missionary Kirk Anderson in 1977, chained him to a bed and raped him repeatedly in hopes he would marry her. She escaped and never served any jail time. (In 2008, she made the news again when she had her pet pit bull cloned.)

The first full-series release of a landmark TV drama. David Janssen will forever be immortalized as Dr. Richard Kimble, a man on the run, convicted of the murder of his wife that he claims was done by a one-armed man. He is hunted by Barry Morse as Lt. Philip Gerard, who, by the series’ end, owes his life to Kimble. A bit steep, but worth the price.

This excellent doc has become a rallying point in the fight to stop mountaintop removal coal mining. In West Virginia, an Appalachian town bands together to prevent a coal company from destroying all that they hold dear. After years of being ignored and abused, the arrival of Robert F. Kennedy Jr. brings their plight to national attention. With Emmylou Harris, Naomi Judd and Kathy Mattea.

THE PHANTOM OF THE OPERA

Blu-ray release of the greatest silent film ever made, fully restored to include all the most shocking elements that were excised after horrifying early theatergoers, and it includes the rare early two-color Technicolor sequence. Lon Chaney forever cemented his hold on movie history as the deformed tunesmith who stalks the catacombs beneath a Paris Opera House. A must-own.

We love this flick! Christopher Walken stars as the Angel Gabriel who resents humans because God gave them souls, making angels second-class citizens in Heaven. But humans are championed by angel Eric Stoltz, who captures an evil soul that Walken needs to end the world. With Viggo Mortensen as the Devil, and Virginia Madsen. Now available in Blu-ray.

An artful, adult and serious PG-13 big-budget period-piece/romance that’s … made in America? Yep, teen heartthrob Robert Pattinson stars with Reese Witherspoon, Hal Holbrook and some of Hollywood’s most underrated actors in this Depression-era tale of a would-be vet who winds up at a two-bit circus. There he becomes enamored of the equestrian wife of ringmaster Christoph Waltz.