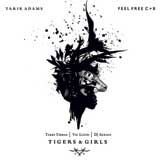 Sometimes vanity projects work. For every The Return of Bruno and “Whatzupwitu,” there is the occasional … umm … So, yeah, Jalin Roze’s manager and label boss, Tarik Adams, takes his own star turn here. Thankfully, Tigers & Girls is not Clive Davis Sings or Suge Knight Raps the Classics, and reminds us that Pebbles managed TLC, Jay-Z was head of Def Jam for a while, and L.A. Reid was in The Deele. Tarik wanted to make a movie in musical form and is mostly successful here. His unabashed love of all things Kanye (808s especially) is evident but not distracting. The album follows the tried-and-true roller coaster of a relationship (hey, 43 minutes is my average for relationships these days, too). As with most films, the best part is the fight scene: the title cut featuring Roze and J. Cannon. “Runway Runaway” is the point where Adams mops up what remains of his heart and hers, and features a subtle vocal from J.D. Green mixed with Aaliyah samples. This album is a definite grower, and surprises you with its durability. One to watch.