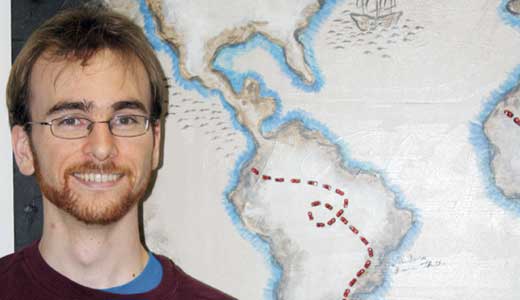 Hailing from Paducah, Ky., Ballowe began his theater career in the fourth grade. “I spent much of my childhood performing in productions at Market House Theatre,” he says. “Some of my favorite roles include Billy from ‘On Golden Pond,’ Harold Hill from ‘The Music Man’ and Baloo from Rudyard Kipling’s ‘The Jungle Book.’” While in college at U of L, where he was a theater and music-history student, Ballowe appeared in productions of “Hamlet” and “As You Like It.” This summer, he performed in “Equus” at the Bunbury Theatre.

Ballowe and fellow U of L theater students are working to further Bottoms Up Theatre, the troop that put together “Hell’s Awesome” and “The Spy and the Playwright.” “A Night at a Restaurant” is the first play to be advertised under the Bottoms Up label; it is also Ballowe’s directorial debut.

“A Night at a Restaurant” opens with an exchange between an established customer, Mr. Diebold (David Miller), and waitress Sandy (Kari Scharfenberger) as the restaurant prepares for a busy Saturday night. The protagonist, Bartholomew (Derek Wahle), is a new waiter who gets stuck dealing with the worst customer ever, the feared regular Mr. Bell (Collin Sage). The conflicts among these characters unfold throughout the production, coming to involve others, such as The Almighty Health Inspector (Jeremy Dugan), who’s charged with maintaining the cleanliness of the restaurant. Ballowe strives to bring to light the comedic nature of sex and how the taboo subject would play out in a situation where patrons could order up physical gratification as if it were a basket of chicken wings. The employees, just as in a conventional restaurant, are concerned with providing the best service possible.

Ballowe is excited to debut his first production, which teeters on the R-rated line. “The play contains elements that could turn some away, and you never know how the show will be received until opening night,” he says. “It feels good to take a risk. It makes me feel alive.”

As far as anticipated audience reaction goes, Ballowe doesn’t think there will be many shades of gray. “I think you will either really get a kick out of it, or be totally turned off. The play is a bit extreme like that.”