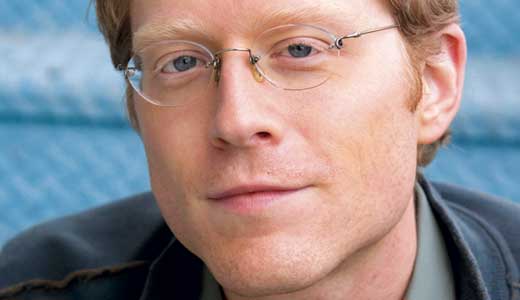 Broadway star Anthony Rapp will give the University of Louisville Pride Week keynote address Thursday in the Student Activities Center. Rapp, best known for originating the role of Mark Cohen in the Tony Award-winning musical “Rent,” is an also an accomplished film actor, with featured roles in “Dazed and Confused,” “School Ties” and “Adventures in Babysitting.” Rapp is the best-selling author of “Without You: A Memoir of Love, Loss, and the Musical ‘Rent,’” the 2006 memoir of his experiences with “Rent,” which also covers the loss of playwright Jonathan Larson and his mother’s concurrent battle with cancer.

LEO: What do you see as the biggest issue facing LGBT youth and college students today.
Anthony Rapp: Certainly it’s important for administration, professors and RAs to be informed and for there to be safe space for people to be themselves. I think gender identity stuff is probably still underexamined, underrepresented and underfunded. It doesn’t have quite the support system in place that general GLB things do. And straight allies are incredibly important, if there’s to be a sharing of the burden of advocacy. If you are witness to someone getting harassed, or are witness to a conversation in a classroom, or to policy issues that are unfair, speak up and address it, take it on. Don’t be a silent accomplice to letting it continue.

LEO: What was the process of writing your memoir like, to go from interpreting and performing someone else’s work to creating your own?
AR: I felt like I had to relive the experiences to write about them. It was so important to me for it to be moment-to-moment truthful, for it to feel like it was being brought to life, so that was hard. It was the hardest thing I’ve ever done. At least at the time, there were very few memoirs out there about young people losing a parent. So (my publisher and I) felt it was an important story to tell, to share insights into the experience that could give comfort to someone going through something similar. In the feedback I’ve gotten over the years, that’s been very much the case. People have taken it to heart, and it’s helped some people in some intense situations, and that’s very, very gratifying.

LEO: You’re playing Andy Warhol in the new musical “Pop!” at Pittsburgh’s City Theatre next year. What is involved in preserving and interpreting Warhol’s legacy, especially in a musical-theater context?
AR: It’s kind of a heightened experience and very much inspired by pop art itself. It’s not a straight-ahead biographical piece, it sort of explodes open some ideas. It’s inspired by a kind of vaudevillian feel, but it’s more interested in exploring the nature of his legacy and the relationship he had with his superstars at The Factory. The music runs the gamut — some of it is inspired by disco and ’80s pop, which was so much a part of his world. But (Warhol) doesn’t sing a whole lot in this show. There’s one song he sings that I think is quite beautiful that’s inspired by Minimalist composers like Philip Glass or Steve Reich, so it’s not at all traditional musical theater music.

LEO: Adapting non-musical material into stage musicals is a hot trend. Say there are roles open in musical adaptations of “School Ties,” “Dazed and Confused” and “Six Degrees of Separation.” Which do you audition for?
AR: “Dazed and Confused.” I think that would lend itself the best to musical, because the music is already such a part of it, and I can really see those kids singing songs.