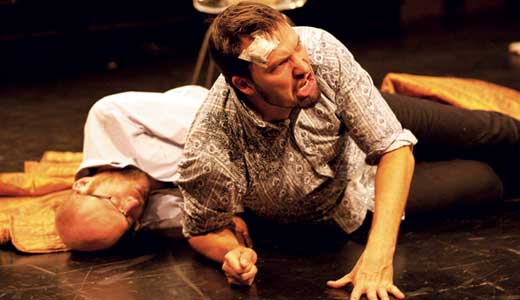 If you’ve ever attended a dinner party that veered dangerously off the rails, you can appreciate the absurd lengths to which Peter Sinn Nachtrieb’s “Hunter Gatherers” goes to explore the human condition in all its barely confined glory. This audacious and incisive play, which received the prestigious Harold and Mimi Steinberg/ACTA New Play Award from the American Theatre Critics Association in 2007, demonstrates handily why Nachtrieb is one of America’s most exciting young playwrights, and Mike Brooks’ impeccable production cements the nascent Theatre 502’s reputation as a theatrical force to be reckoned with. If last month’s nomadic teaser “The Debate Over Courtney O’Connell of Columbus, Nebraska” was Theatre 502’s warning shot, consider “Hunter Gatherers” its full-scale artistic invasion.

For those who saw Nachtrieb’s sprawling “BOB” in last spring’s Humana Festival of New American Plays at Actors Theatre, “Hunter Gatherers” more closely resembles his tight and focused “boom,” the most frequently produced play in regional theater during the 2009-10 season, which Brooks directed for the Necessary Theatre that year. “Hunter Gatherers” confines the action to one apartment and features a small cast of two couples who reunite every year to celebrate their joint wedding anniversary. From the top of the first scene, we see that the orderly veneer coating the trendy loft shared by Richard (Eli Keel) and Pam (Leah Roberts) is thin indeed, as hyper-masculine installation artist Richard conscripts his reluctant wife Pam into a shocking chore to make the meal they will share with their friends, Reiki practitioner Wendy (Sarah East) and doctor Tom (Joseph Hatfield), an especially primal occasion. Wendy arrives with a few natural urges of her own, and over the course of the play, she and Richard, the sensualists, reveal their ability to sacrifice without hesitation while dragging their sensitive spouses Pam and Tom kicking and screaming into the cave.

One of Nachtrieb’s gifts is how naturally he can make even the most ridiculous scenarios play by weaving the quotidian details of modern life (parking in the city, prom nostalgia) throughout the play’s persistent and violent conceit — that under our civilized trappings beat the raging hearts of primitive, unreasonable animals. He also handily subverts the contemporary “living room play,” making the stakes much higher and more dramatic — not to mention funnier — than the usual cocktail party banter affords.

Fans of Louisville’s various bids for artistic and commercial independence (commonly shorthanded as that which we would like to “keep weird”) should not miss this production, if only for clear confirmation that Louisville artists can hold their own and then some against any imported talent. The cast and design team (kudos in particular to Scott Anthony’s delightful sound design) is uniformly excellent with no weak links, and under Brooks’ direction, they realized the playwright’s vision with dramatic acuity and sympathetic heart. I understand completely why theater artists find it necessary to head to New York to forge careers, but for now, I am grateful that Theatre 502 is here to give them more opportunities to practice their craft in airtight productions of exciting contemporary plays.