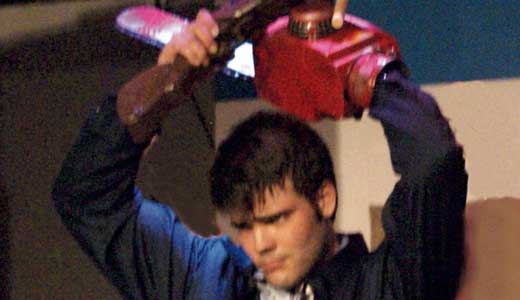 ‘Evil Dead: The Musical’
A production by Alley Theater. Directed by Joey Arena. Continues through Oct. 31 at 1205 E. Washington St. For tickets or more info, go to www.louevildead.com.

“Do you want to sit in the splatter zone or not?” I’ve got to say, in 30 years, that is the first time I’ve been asked such a question. Fear took hold and a general admission seat was secured, sans plastic poncho. The Pointe, the beautifully restored and repurposed warehouse in Butchertown, home to several small businesses as well as the Alley Theater, houses “Evil Dead: The Musical” through Halloween.

As subtlety is not the aim for the evening, “Evil Dead: The Musical” is obviously a stage interpretation of the cult classic Sam Raimi/Bruce Campbell film — and its sequels — with multiple vocal numbers and hilarious choreography. This production, Alley’s second run of the show, is unabashed fun, even when your tongue is stuck in your cheek for the better part of two hours. Director Joey Arena is back with several members of his 2009 cast and a handful of new faces.

Mason Stewart’s character, Ash, is appropriately campy and over the top, breaking down the fourth wall with well-timed asides, winks and nudges. Though this first performance was plagued with a few sound issues, muddying up some of Ash’s monologues and features, Stewart overcame them, delivering what the speakers may have lost through effective body language and facial expressions. This ain’t Shakespeare, folks.

The biggest highlights of the evening were two of the bit players, Neil Brewer’s Jake and Tyler Dippold’s Ed. Jake’s country bumpkin proved more than easy comic relief, often holding together some of the plot’s thinner moments with physicality and salesmanship that won over everyone in the audience. Ed doubles as girlfriend Annie’s butler and accessory, struggling to get a word into any conversation, his frustration mounting but never rising above his Adam’s apple. Once he has been taken over by demons, even his possessed self has to play second fiddle when he’s reminded that his character is not important enough to mount an attack on the main character, leading to his solo number, “Bit Part Demon.” Dippold’s got the best voice of the cast, a pure tone made for the stage, and this song leaves you wanting more.

It’s difficult not to give up all the punch lines, but you should know that Felicia Corbett’s comic timing is perfect. Someone should write her a few more lines, because her Shelly doesn’t get nearly the spotlight she deserves. Shelly’s boyfriend, Scott, as played by Daniel Smith, is a character ripped from a Kevin Smith flick, a meathead whose sole purpose is panty-chasing. Smith’s portrayal reflects the audience itself; though they may want to be the square-jawed Ash, we were more amply represented by Scott’s everyman schlub.

“Evil Dead: The Musical” may not be the height of your theater-going season, but it’s a whole lot of fun. Make the most of it by going with some pals, and make ample use of the full bar upon entry. And, given the choice, you definitely want the splatter zone.