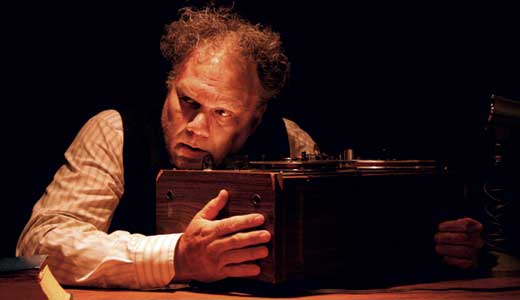 James Barrett Cooper is a man of many hats: actor, teacher, curator and, most recently, founder and artistic director of the Savage Rose Classical Theatre Company. When I first met Cooper, I was 12 years old, all frizzy hair and braces. He was directing a production of “Alice in Wonderland” at Walden Theatre, and I was playing the March Hare. Quite frankly, the dynamic man with his huge presence and Rob Zombie lunchbox scared the shit out me. Nine years later, Cooper is bringing that same passion and intensity (now more exhilarating than intimidating) to classical theater.

He arrives at Heine Brothers with son Atticus in tow, stopping to buy him a chocolate milk before we sit down to talk Shakespeare, language and making a longtime dream come true.

LEO: How did Savage Rose first come into being?
James Barrett Cooper: Well, the idea’s been gestating for 30 years, since I was at Walden Theatre. But (in 2008), an editorial came out on the Theatre Louisville website (saying), “Where’s the classical theater?” I had just been talking to somebody about how much I’d like to start a classical theater … so literally, I read that and my heart started going a thousand miles a minute. (Then in December 2008), we started doing the articles of incorporation (and getting) people of like minds who were interested together, and that’s when it really started.

LEO: Where does the name Savage Rose come from?
JBC: Well, I always wanted something with “rose” in it, because (it’s) Louisville and the original theater that Shakespeare’s plays were performed in was the Rose … And it turns out there was an inn right next to the Blackfriars Theatre (called) the Belle Savage. And I thought, “Ooh, Savage Rose. There you go. That’s good.” Because (that’s) the kind of theater I want to do: I want it to be bold, beautiful and strong, like the rose. Something that is artistic is beautiful because of the language. And yet, underneath it, there is the thorn … I wanted to be gorgeous, but I also wanted to be primal and real and not recited.

LEO: How would you describe your vision as a director?
JBC: My whole idea has always been to do it as straightforward as possible. (And) that just wasn’t being done. … You had some small companies attempting Shakespeare, but (they) wouldn’t do it straightforward. I don’t mind if they take it and put it in the Chinese underground pagoda, upside-down, in the year 2525, just so long as the text is supported. A lot of times they would take the text and mold (it) to their concept. (That’s) a big bugaboo with me.

LEO: Where do you see Savage Rose fitting in the Louisville theater scene?
JBC: You have to find your niche. We’re not looking for just the erudite crowd. We want young people to come and see these shows, because they’ll go, “My god, that’s just like a television show. That’s crazy that this thing was written in 1630 and it’s about brother/sister incest. And he cuts her heart out.” I mean, (you) want to talk about people like Quentin Tarantino and the Coen Brothers, that’s exactly where it came out of. We want people to come out and not be afraid of the language, because it’s the language that is the story.

LEO: You’ve been doing the “Words, Words, Words” play reading series for a couple years now. What can audiences expect from one of your readings?
JBC: Really what the “Words” series is for is to do pieces that have never had any sort of production around here, have never been read out loud, except possibly in a graduate theater course. The actors usually get their scripts three to four weeks in advance, and then we come in and just put it on its feet, with no rehearsal. And it is absolutely fascinating what happens. It’s so vibrant, so alive and so immediate. The audience is watching the actors discover their characters. … You get to see what it might be like for a company back (in Shakespeare’s day) to actually begin together.