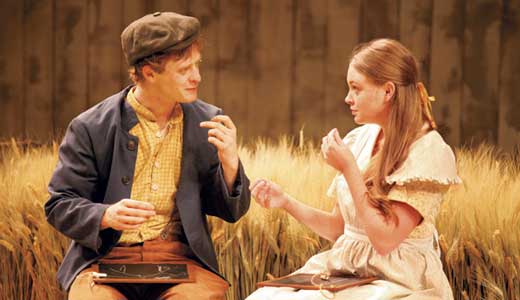 ‘The Adventures of Tom Sawyer’
Adapted by Laura Eason from Mark Twain’s novel and directed by Jeremy B. Cohen. Continues at Actors Theatre of Louisville through Oct. 29 in the Pamela Brown Auditorium, 516 W. Main St. For tickets or more info, go to www.actorstheatre.org.

Plucky orphans are a timeless joy. Actors Theatre’s “The Adventures of Tom Sawyer,” playwright Laura Eason’s adaptation of Mark Twain’s classic novel, celebrates a time when childhood was wild, innocent and free, when marbles and dead rats functioned as kid currency and precocity manifested itself in ambitious escapades that occasionally took sudden, dangerous turns rather than in biting sarcasm. This family-friendly production has a playful sense of humor and adventure that will appeal to children as well as nostalgic older generations.

The play is structured in episodic chunks and includes most of the book’s iconic scenes, such as Tom conning the neighbor children into whitewashing his fence. The structure works for holding the interest of younger kids who might not have the stamina to follow a complex plot all the way through to the end. However, the result is a little thin for audiences who expect a stronger narrative arc than a villain — the definitely un-P.C. Injun Joe (Michael D. Nichols), wielding a knife the size of a cricket bat — merely menacing townspeople and eluding capture for an hour and a half.

Though most of the characters are children, the actors playing them are not, and their performances reflect director Jeremy B. Cohen’s stylized approach to childlike wonderment. Adults playing children do need to imbue their characters with a bit of a wide-eyed exuberance; in Cohen’s hands, that means amping up the volume and staginess to the level of contemporary children’s TV. But that helps the production wisely avoid realism, which might come off a bit too earnest for Twain, and helps some of Twain’s more wicked bits of humor translate to the stage.

Some truly silly details — faceless mannequins dressed as churchgoers, a bit of cross-dressing in the schoolroom — also fuel that anarchic spirit of childhood Twain so famously celebrated. Most of the adult characters are fools of one kind or another — the preacher and the schoolmaster, those twin towers of childhood authority, especially — but Tom’s Aunt Polly (Nance Williamson) is sympathetic as she struggles to keep her late sister’s kids in line.

As Tom, Tim McKiernan (who originated the role in the 2010 Hartford Stage production) shows just the right amount of bravado and vulnerability to make the audience cheer on all of his exploits, no matter how ridiculous (swinging a dead cat in a cemetery to get rid of warts) or noble. Hayley Treider’s Becky Thatcher is sweet but spunky, and definitely not to be trifled with — she makes Tom work for her affections — and the hilarious Nate Trinrud steals several scenes as Sidney, Tom’s suck-up brother. Former ATL acting apprentice Robbie Tann is unforgettable as Huck Finn, Tom’s “vile and vulgar” sidekick. The haunted knowingness of Tann’s Huck, a ragamuffin with dark circles under his eyes, quietly evokes the wild, sad story of the neglected boy, whose dire circumstances threaten to overshadow Tom’s genteel captivity.