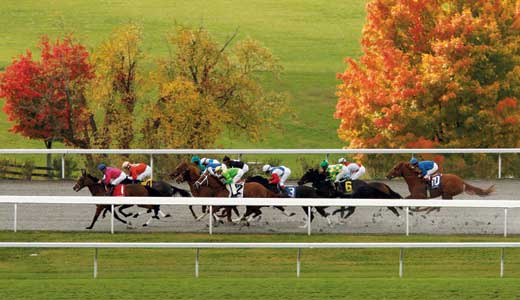 Racing fans heading from Louisville to Keeneland Race Course, near Lexington, couldn’t have a more direct route: Interstate 64 to U.S. 60. Four lanes all the way, right up to the front gate. The track even has a “Louisville” lot, with an exit that empties out onto U.S. 60 at the end of the day to speed the customers (flush or broke) on their way without delay.

Which is all very convenient and efficient, especially for a track that clings like a claw to tradition. But there is another way to Keeneland — a more scenic and slower-paced route that, over the years, has developed its own loyal following, and even its own name: The Back Way to Keeneland.

Don’t look for road signs that say “This Way to The Back Way” or pound your Tom-Tom for directions. It’s an unlisted number. Just a little back way that travels through bucolic countryside and past thoroughbred horse farms to deliver easy-goers to the back gate at Keeneland. (After they’ve dodged Osage oranges and made the square corner at the railroad crossing.)

The crucial thing is finding the Old Frankfort Pike — an ancient “turnpike” from Frankfort to Lexington that has long been bypassed by more modern highways and interstates. It’s a little byway highway, with smaller lanes lacing to and from it, along which the movie “April Love,” with Pat Boone and Shirley Jones, was filmed in 1957. And it looks pretty much the same today as then.

The pike begins kind of curvy and soon makes a country crossing over a railroad track. This is a tricky corner, especially if it’s dark. You’re going along and the turn comes up suddenly — and the next thing you know you’re in somebody’s yard. Just back out.

Parts of the George C. Scott movie “The Flim-Flam Man” were filmed along these light-traffic tracks. In one scene set over in Georgetown, Scott cons Slim Pickens out of his tobacco-sale money.

The road straightens out then for a run through some of the oldest horse farm country in the Bluegrass. A century and a half ago, Robert A. Alexander, an American born but Cambridge educated farmer, founded Woodburn Farm here, breeding thoroughbreds that dominated the bloodlines of early Kentucky Derby winners. Alexander invented the American Stud Book, in which he kept meticulous records of the matings of sires and dams. Through those records and extended pedigrees he was able to show prospective buyers just who a horse was that he had for sale. That was the foundation of the Kentucky horse breeding industry. Still is.

It is woodsy along this stretch. On the right side is Airdrie Stud, the prominent farm of former Kentucky Gov. Brereton Jones and his wife, Libby Alexander Jones. The woods open to broad horse farm pastures on either side of the pike, with ancient Osage orange trees rooted along old stone fences. Almost all the stone fences in this neck of the woods were built by the New family, former slaves, who kept their craft going as a family business through many generations.

The bark of the Osage orange trees is deeply rivened, and the trunks twist with age. Indians used Osage wood to make bows that would flex, but not snap. This time of year, the trees drop their green “oranges,” also called hedge apples. They’re all over the road. The thing to do is pick up a couple and place them in corners of your house. It is said the Osage oranges discourage spiders.

Soon you’ll come upon Nugent’s Crossroads. If you go left, it’s about a mile on U.S. 62 to “historic” Midway, where the railroad tracks run right through the center of town, with shops and restaurants comprising most of the business district. A right turn on 62 takes you to Lane’s End Farm, the new home of Zenyatta, who is in foal to Bernardini.

But we’re heading straight. The road travels past Three Chimneys Farm, the stallion station of the late Seattle Slew, and Dynaformer, sire of Barbaro.

Then you come to an old country store. Today, the store is a slightly upscale lunchery called Wallace Station. Years ago, when the building was a country store, with gas pumps along the road, you could get a really good bologna and cheese sandwich. When our carload of horseplayers would stop at the store, the owner would produce a “punch board,” which I think was 50 cents a punch. You used a little metal push-thing to punch out a rolled-up paper from a big grid of chances. Occasionally a winner might pay off, at say $5 or $10. Not too often.

One day, the storeowner told us he wouldn’t have the punchboards much longer. “When Wallace Wilkinson gets elected governor,” he declared, “we’ll be one of the first places to have a lottery machine. He told me so himself.”

At that point, we’d never heard of Wallace Wilkinson, or the lottery, but it all happened — and I still don’t know how.

Next up along the road is the mysterious Headley-Whitney Museum. George W. Headley III was an art buff who studied in Paris, then went into making jewelry. For a time, Headley operated a high-end jewelry store in Los Angeles, at the Hotel Bel-Air, where his customers included Mae West and Joan Crawford. Headley married Barbara Whitney, the sister of Cornelius Vanderbilt (C.V.) Whitney and daughter of Gertrude Vanderbilt Whitney, the founder of the Whitney Museum of American Art in New York. In other words, Headley hit the Pick Six.

While discussing all that, and contemplating what in the world might be on display in the Headley-Whitney Museum, you’ll probably drive right past the turn-off to Keeneland. But that’s no disaster. Just down the road, you can turn around at Darby Dan Farm, where seven Kentucky Derby winners were bred. Five of those came when the farm was called Idle Hour, owned in the Roaring ’20s by Col. E.R. Bradley. The five “B”s include Behave Yourself, Black Gold, Bubbling Over, Burgoo King and Broker’s Tip. Darby Dan won the Derby with Chateaugay and Proud Clarion. And the Epsom Derby with Roberto. Farm scenes in the movie “Secretariat” were filmed at Darby Dan.

The other side of the road has its history, too, at one of the smallest Bluegrass horse farms, King Ranch (Triple Crown champion Assault). Small in acreage here, it’s just the racing division of the fabulous million-acre King Ranch of Texas.

OK, now turned around, we head back to the turn-off to Keeneland on Ky. 1969, also called Elkchester Pike. Wind along that road, cross the tracks again, and turn left onto Van Meter Road, then right onto Rice Road, and that takes you right up to the Back Gate at Keeneland.