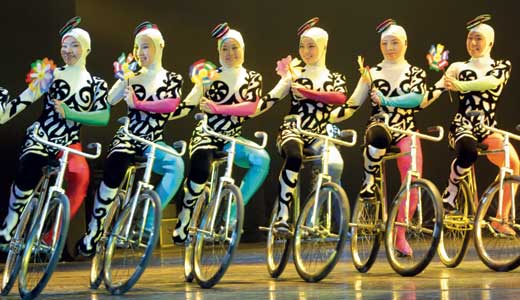 “Nosferatu, that name alone can chill blood,” reads a title card, ripped from the diary of Johann Cavallius. The able historian of Bremen, Germany, describes the monster who brought the plague to his shores — a vampire styled long before the hunky rebrandings of “Twilight,” “True Blood” and “Lestat.” If his moniker doesn’t give you the willies, Nosferatu’s elongated talons, Spockian ears and bug-eyed glances should. Actor Max Shreck, who plays the Count, seems to glide through the grainy, dream-like atmosphere of this 1922 creep show — a bootleg retelling of Bram Stoker’s “Dracula.” Just in time for Halloween, F.W. Murnau’s classic, silent film will be the first screened in something they’re calling “The MINI of Louisville LIVE at the Clifton Center’s Wild and Woolly Film Series.” A cash bar and vittles from Morel’s Vegan Food Truck will be available before the show. —J. Christian Walsh

The Kentucky School of Art is bringing Cincinnati artist Denise Burge to town. She works in multiple media but has a particular fondness for quilting. “Already highly romantic objects,” says Burge, “quilts exist as a physical analog to the forms and concepts that they represent.” On Thursday, she’ll lecture on “Art, Activism and Ambience” at 6:30 p.m. at the Louisville Visual Art Association (free and open to the public). Then on Friday at noon, Burge will be part of a panel discussion at the Kentucky Museum of Art and Craft. “Contemporary Art Quilts and Conversation” also features Penny Sisto, Denise Furnish and Scott Scarboro. The moderator is Judy Schwender, curator of collections/registrar at Paducah’s National Quilt Museum ($20 includes a box lunch, RSVP: 589-0102). —Jo Anne Triplett

It’s astounding, time is fleeting — seriously, it’s Halloween already? That means it’s time for drag queens, saucy maids and groupies galore in Pandora Productions’ third annual presentation of Richard O’Brien’s cult classic “Rocky Horror Show.” Innocent nerds Brad and Janet set out to visit their old professor to celebrate their engagement and end up at what looks like “a hunting lodge for rich weirdos,” though the truth is far more sinister and fabulous. Will Brad and Janet escape with their dignity and innocence intact, or will they give themselves over to absolute pleasure? I think you know the answer to that question. This year’s production has moved to The Connection, and a nightclub setting is perfect for this sexy glitter bomb of a musical — you’re going to need a dance floor to do “The Time Warp,” after all. —Erin Keane

Guitarist Glenn Jones was recently profiled on NPR’s “Weekend Edition Saturday,” an especially sweet infiltration of suburban nation for a man who has spent much too long living in the shadows of an arts and entertainment world dominated by grotesque cartoons. A long-serving artist, too pure for prime time, Jones spent years in Boston leading the group Cul de Sac, an ironically named avant-garde group who were either way ahead or way behind the curve. A protégé of the late solo guitar master John Fahey, Jones keeps Fahey’s finger-picking, contemplative, pastoral style alive today. His new album, The Wanting, was released by Thrill Jockey Records last month, and he is now touring in support of its beauteous offerings. At $8, this is a great bargain in a beautiful theater, so consider this your prayer service for the week and get it done early. —Peter Berkowitz

Austin, Texas, has offered the world many freaks, longhairs, acidheads and hard-rockin’ dudes through the years, and it seems as though it will take a mighty mountain of corporate takeovers to tame the unwieldy beasts that keep said city weird. The Black Angels are one of the bright lights to have emerged from their city of origin and conquered the world, one odd duck at a time. While it’s been more than a year since they dropped some new jams on our heads, the group did release a special LP of early material on Record Store Day, and might have some new future classics ready for you. The clever bill also features relative veterans Dead Meadow, the D.C.-via-L.A. band led by Jason Simon, and Spindrift, the psych cowboys gone nutzo who recently released Classic Soundtracks Volume 1, soundtrack music, in the words of Richard Lewis, from hell. —Peter Berkowitz

Like your bladder after a few pitchers of Miller Lite, the Highlands Fest just keeps going and going. Now in its seventh year, it has changed hands over time and has now landed squarely at the feet of the bars it helps promote, namely sponsors O’Shea’s, Flanagan’s, Wick’s and Baxter’s 942. Like always, there will be live music by the likes of Alanna Fugate, King Sonic, The Instruction and more, local arts and craft booths and a children’s area. New this year is the Tap ’N’ Run, a 4K race that involves chugging beer along the route. “We wanted to keep the Highlands Fest going because we feel like it is something unique we can offer the community,” says event coordinator Ashley Isaacs of Flanagan’s. “We feel like the Highlands is an amazing area, and we just want to share that with everyone else.” —Sara Havens

‘iPorn, or what you crave’

There was a time when porn lovers had to venture out of the house to procure their fetish films, either from the back rooms of video stores or seedy venues the likes of Blue Movies. The timid, meanwhile, were stuck with whatever soft-core selection was showing on Cinemax. But then came a little thing called the Internet, and pornography was suddenly available to anyone with web access — just point, click … and release. It’s a phenomenon the Actors Theatre Apprentice/Intern Company explores in its original performance, “iPorn, or what you crave.” Humorous, thought-provoking vignettes will chart the impact the Internet has had on sexuality through personal stories, fictitious scenarios and researched texts. The show is 18 and up, but that doesn’t guarantee there will be boobs. —Sarah Kelley

Richard Thompson is one of my favorite songwriters, singers and guitarists of all of recorded history. Did you buy your ticket yet? As a journalist, I am supposed to be objective, but really, as primarily a music journalist, such standards are fluid. I’m also called upon to be a critic, and I’ve listened to a lot of music in the past 30-some years. In all sincerity, with no half-measure, it is my duty to tell you that this man is a treasure, a living icon of great storytelling, heartbreaking balladry, fantastically clever and melodic guitar playing, and one of the many great artists not heard enough on public radio, let alone commercial radio. His work with Fairport Convention in the hippie era would have been enough for one lifetime; his work with then-wife Linda Thompson would have been enough for two. See him now, or live shamefully. —Peter Berkowitz

Gather up the kids, and get them to the Brown Theatre next Wednesday. Why? Because the place will be crawling with acrobats. Direct from Beijing, the National Acrobats of the People’s Republic of China will swarm the Brown with its unique brand of stunning entertainment. The acrobatic troupe was the first National Performing Arts Troupe established by the government of the People’s Republic of China in 1950; since then, it’s been traveling the world, and this represents the first-ever American tour. Part of the Yum! Family Series, this one is a guaranteed good time — although parents should be forewarned that the Brown is not responsible for any property damage or injuries incurred during children’s backyard re-enactments. Which is to say: Kids, don’t try this at home. —Kevin Gibson

While the Firehouse Gallery is part of the Photo Biennial featuring the photographs of Julius Friedman, it has stretched to include paintings by Cheryl Chapman and tea bowls Sebastian Moh. “(My) show is just a little reminder to slow down and look,” says Friedman. “In this day of iPhones, emailing, going from A to B, most of us do not stop and take time to really look around ourselves …” While Friedman’s world is external, Chapman’s is internal and personal. “The physical properties of paint, to me, embody the elements of sensual experience,” she says. “The luminous, organic pigments can be manipulated to give voice to vision.” The ceramics by Moh are as direct as how he describes them — “My goal is to simply make good work.” —Jo Anne Triplett

Still in the mood for a hauntingly good tale this month? Good. The Bunbury Theatre presents “Blithe Spirit,” a comedy by writer/director/composer Noel Coward. The play — first produced in London’s West End in 1941 — is celebrating its 70th anniversary this year. Coward, known for his wit and flamboyant character antics, came to the stage at age 11 and carried on the tradition of excellence in English theater for many years. Set in England, “Blithe Spirit” depicts a novelist and a gentleman, Charles Condomine, as he is haunted by the spirit of his late wife. Her ghost is conjured by a “happy medium” — leading to comedic relief — furthered by the accidental death of his current wife. The two spirits then continue to haunt Condomine. Spooky. —Allison Ray