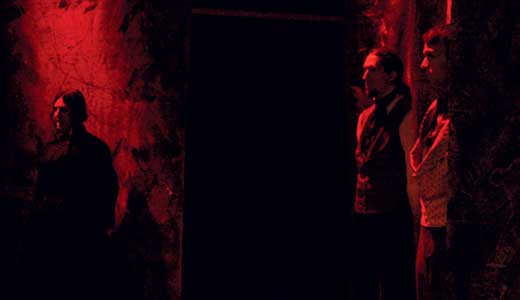 ‘An Evening with Poe’

If you visit Edgar Allan Poe’s gravesite in Baltimore, you’ll likely find a bottle of cognac and a few long-stem roses. Poe’s life was as dark and mysterious as his poetry and short stories. Known as the father of the modern detective story, Poe only lived a mere 40 years, but his stories continue to haunt fans and English majors alike. The Frazier History Museum is paying tribute to Poe with a live stage show featuring dramatic interpretations of his most famous works. There will be five tales in all, including the live, original “Pit and the Pendulum” score by Chicago artist Charlie Universe. —Sara Havens

You know you’ve arrived when Morrissey gives you a nickname. “’80s Legs” is what Britain’s King of Brood affectionately dubbed Army Navy’s Justin Kennedy when the two met earlier this year. No sulking can be found on The Last Place, the latest concoction of tightly strummed Technicolor pop from Kennedy, Army Navy’s singer and principal songwriter, and an L.A. wardrobe stylist by day. Kennedy’s musical beginnings trace back to his days with Ben Gibbard in the now-defunct Seattle band Pinwheel. Army Navy spells pop in all caps, much like Teenage Fanclub or The Housemartins, and The Last Place is a menu of potent earworms that revel in complexity just long enough to make a point before they vanish. Champaign, Ill., grit-rockers Santah open the show with material from their forthcoming debut White Noise Bed. —Mat Herron

It’s the goal of any red-blooded American child to gather enough candy at Halloween to last until Christmas. To help facilitate this goal, family friendly Halloween events are a must. Cue the Dreams With Wings event, which includes a showing of more than 1,000 carved pumpkins, Louisville’s largest pumpkin pie, games, crafts, live music by the Louisville Leopard Percussionists and others, and trick-or-treating to help the kiddos get that sugar fix they crave. Dreams With Wings is a nonprofit group that assists individuals with intellectual and developmental disabilities in the Louisville area. —Allison Ray

Co-founded by Page Hamilton in New York in 1989, Helmet and its heavy music — call it post-hardcore if you must — married aggression and precision, beginning with its 1991 debut Strap It On. Hamilton wasn’t your average angst-ridden barker/shredder, using his formal jazz training to infuse Helmet’s work with compositional strength. The following year, Helmet’s major label debut Meantime went gold, earned a Grammy nomination and influenced thousands of acts, like The Deftones and Tool. In 1998, Helmet disbanded. Hamilton, for his part, dove into soundtrack work for “Catwoman” and “Saw,” as well as a continuing partnership with Academy Award-winning composer Elliot Goldenthal (“Heat”). Hamilton played lead guitar in David Bowie’s backing band before rebooting Helmet in 2004 with a new lineup. Their seventh album, Seeing Eye Dog, promises more brains and brawn. Stroker, Trophy Wives and Trails also perform. —Mat Herron

The Mighty Kindness Hootenanny nabbed second place for Best Annual Festival in LEO’s recent Readers’ Choice awards. Is this proof that kindness wins out in the end? Possibly. The Hootenanny brings together local earth, body, mind, spirit and heart-friendly services that make our state more connected, sustainable, healthier and happier. In addition to arts and crafts and live music, there will be informational booths from local farms, green businesses and social justice advocates. Local performers include Andrea Davidson, Tyrone Cotton, Keltricity, J.D. Green, Divinity Rose, The Berries, Huh roBots, Some Day Soon, and Serpent Wisdom. If you’ve been feeling down lately, it can’t hurt to head to the Hoot — I hear happiness and kindness are contagious. —Sara Havens

Someone making art out of ice has my attention. Joe Autry says he works in materials like stone, wood and metal, forgetting to mention creating sculpture out of ice in places like Russia. He and his studiomates Troy Haggard, James Napier and Rex Owen want to show us exactly what they do, so they’re having a studio open house. “The vision for this space is to create a modern sculptural renaissance in Louisville,” Autry says. “To saturate the city in sculpture; a space for sculptors that are not competing in this arena for the one or two city-funded projects, but creating our own projects that will be wanted by the world to memorialize these times of rapid change. To grow appreciation for these trades of being an artisan sculptor.” —Jo Anne Triplett

Darkness falls across the land, the midnight hour is close at hand. Creatures crawl in search of blood, to terrorize y’alls neighborhood … or so said master of macabre Vincent Price in Michael Jackson’s “Thriller,” terrifying a generation of children. On Saturday, 21c will be crawling with creatures in search of a good time at the Fairness Campaign’s costume party, the last hurrah in a month of events celebrating the nonprofit’s 20th anniversary. Dubbed “It’s Thrilling How Far We’ve Come,” the soiree includes a DJ, free appetizers, cash bar, zombification station, and a worldwide “Thriller” flashdance on Main Street. —Sarah Kelley

My dogs are lovable mutts, but they don’t like to have the will of humans imposed upon them. So when Halloween rolls around, I embrace the opportunity to assert my dominance by dressing them up for my own amusement. This weekend, Bluegrass Brewing Company in St. Matthews invites animal lovers and their decked-out dogs to enjoy an afternoon of music, brews, food and festivities, including a canine costume contest, the winner of which will have a beer named after him for a month. The event also celebrates the opening of BBC’s new dog-friendly patio. A portion of the day’s proceeds will benefit The Humane Society and Saving Sunny, a rescue group named after a pit bull that survived being thrown from the Clark Memorial Bridge. —Sarah Kelley

When the Vernon Club opens its doors on Monday, there will be more going on than bowling and music — we’re talking naughty nocturnal spirits here, folks. Lexington’s Rebel Riot Revue will turn the Vernon into a sexy haunted house as part of the Haunted Peep-Show Dance Party. DJs Matt Anthony and Duffy will pipe in the tunes to keep the chains rattling. Burlesque and fire performer Hot Damn!! will also be there to entertain and raise a few eyebrows. The event is 18 and over, and costumes are obviously encouraged. It should be noted that the Vernon was built in 1886 and has been the site of a few hauntings over the years. Here’s hoping the club’s otherworldly visitors aren’t easily startled by what they see. —Kevin Gibson

On their 2007 long player Your Big Plans & Our Little Town, siblings Pascal and Lauren Balthrop showed they had traded in their surroundings (the South for Brooklyn, which is its own planet) without surrendering their musical sensibilities. Plans was an opening salvo in a process that began in 2006, when the Balthrops roped in a few friends, including drummer and Louisvillian Titus Falkner (aka Jason Lawrence of Fire the Saddle and The Middle Men), and set about creating a whimsical barnyard freak-folk revue. Balthrop, Alabama returns to Louisville for a weeknight dalliance on the heels of the release of their latest, We Have Electricity. Roots maneuvers from The Slow Charleston, and the always-wonderful Sandpaper Dolls round out the lovefest. — Mat Herron

Before Phil Collins became frontman for Genesis, they were a much more ambitious band. In the early 1970s, Peter Gabriel would alternately galvanize and antagonize the talented ensemble, resulting in many great songs that didn’t fit easily on radio — big epics and character-driven miniatures, with theatrics that mattered as much as the music. They were difficult to stage by the not-always-on-the-same-page original musicians, but in recent years, a tribute band named The Musical Box has worked with Gabriel and others to smooth out the rough edges. The resulting show has been a success for years. The Musical Box is coming to the Brown Theatre intent on pulling off the most challenging of Genesis’ works — the rock opera/concept album The Lamb Lies Down on Broadway. With the approved visuals and costuming that the original band had in mind (but couldn’t always pull off), this multi-sensory experience offers much beyond a tribute-band concert. —T.E. Lyons

Swanson Contemporary has two exhibitions currently on display. Barbara Crawford’s “Four Decades of Photography,” part of the Photo Biennial, covers a span of time, subjects and techniques. The retrospective, with photographs chosen by Crawford, shows an artist growing over the years, from her ’70s female and males nudes, through her 1980s-90s figurative work, to her recent digital projects. The Digital Immigrants is the collective name of five artists, including locals Brad White and Brianne DeRolph. They’ve altered World War II oxygen tanks into sculptures that are on display through the Nov. 4 First Friday Trolley Hop. The online “Oxygen Auction” runs through Nov. 30. A portion of the auction price will be donated to the Wounded Warriors Foundation (visit www.diauction.com for details). —Jo Anne Triplett