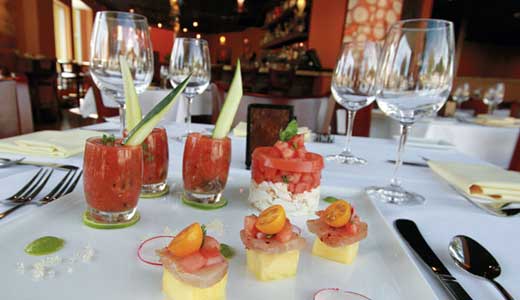 Seviche has been around for 10 years now, if we count Jicama, its predecessor in the same Highlands space, and Chef Anthony Lamas just keeps making it better and better.

This sets a mighty high standard for an eatery I’ve been raving about since the start. I gave Jicama a 93-point rating in its first incarnation. Then when it reopened as Seviche in 2005, I kicked the number up to 95.

I head over there as often as I can, and I recommend Seviche highly to out-of-town visitors as one of Louisville’s best, with Latino flair that proves our city’s exciting culinary scene is about much more than fried chicken, “Southern” fare and Hot Browns.

And now Seviche has evolved again. After a brief closing to accommodate a major remake, it has expanded into part of the next-door space vacated by ear X-tacy. The new Seviche retains the comfortable upscale Latino vibe that we’ve come to know and love, but it affords a little more room to breathe even as it welcomes a larger crowd.

The amiable bar is at the center of a large, triangular room now, with show windows along two sides to allow in light by day and to afford a view of the Bardstown Road street scene at all hours. New separate rooms include a classy lounge with modern overstuffed furniture that looks comfortable enough for napping, and an elegant private room at the rear.

The look, though, is only half of the news: Lamas, too, continues to evolve. In what appears to be a calculated public relations campaign, he’s clearly looking for a place in the burgeoning national chef-celebrity scene and has won television appearances including a win on Food Network’s “Extreme Chef.”

The menu remains Latino, with the creative chef’s touches that add “Nuevo” to the moniker; but there’s always an international accent that takes the bill of fare beyond any single ethnic description.

You’ll notice a lot of regional designations on the dishes, from California Point Reyes blue cheese to Indiana’s Capriole, and meat and poultry from Kentucky producers including Marksbury Farm and Kentucky Bison Co., and Gerber Farm in Oregon. Whether it’s locavore, or bears a heavier carbon footprint, you can count on it having been selected for quality, natural production and a relatively gentle weight on the earth.

Lamas pledges to provide only “sustainable” seafood, harvested so as to avoid using threatened species or harming the environment. To this end, he follows the guidelines of the Monterey Bay Aquarium Seafood Watch Program, a commitment that earned him the program’s “Seafood Ambassador” award.

About 10 aperitivos (appetizers) range in price from $9 to $13 and cover a range of flavors from flaky empanada pastries (vegetarian, spicy chicken or Kentucky bison, all $9) to seafood (mussels in red chili ginger broth, crispy squid “chicharrones” and oysters “a la Lamas,” all $13). If you’re craving something Mexican, you won’t be disappointed with guacamole made at tableside ($11).

The name of the place is Seviche, and Seviche forms a centerpiece for the bill of fare. Call it Latino sushi, if you will, but don’t call it “raw,” as this seafood is “cooked” by the oxidative effect of acidic citrus juices and spice.

About eight seviches, plus daily specials, are mostly $15, and light eaters can easily combine a seviche and an aperitivo to make a light but spectacular meal. Better yet, sample three seviches on an artfully presented tray ($25), or do as our group did and indulge in a combination of five delectables ($41, slightly more if you include the tenderloin or crab).

Our group of seven made short work of a combo of tuna, wahoo, shrimp, crab and more tuna. Five pretty plates, each bearing a different combination of pristine, snapping-fresh seafood suffused with tart-sweet-spicy seviche marinade and an orchestra of Latino flavors. Yum, that’s the word.

The green chile “Caesar” ($9) substitutes an insanely crunchy and addictive spicy garlic crouton the size of a potato chip, which I wish they would make up in quantity and sell in bags, alongside a well-made batch of romaine with a decent Caesar-style dressing, kicked up with pumpkin seeds and grated Parmigiano.

Mary got a bite of a dining companion’s veal calf’s liver appetizer ($11) and declared it the best since college days dining on real French veau at a friend’s house in Normandy. Seviche’s version comes with Point Reyes blue, sweet caramelized onions and a scatter of giant Peruvian limas.

The sous vide treatment infused her airline-style chicken breast (organic, from Gerber farm, $25) with buttery tenderness and rich, truffled flavor all the way through.

A crunchy chimichanga ($17), a fried burrito bigger than my head, was loaded with melted Kenny’s Kentucky Gouda and filled with a rich, spicy mix of butternut squash, diced bell peppers and onions and piquant serrano chiles, plated with crunchy toasted pumpkin seeds and tomato butter.

With several glasses of wine from the well-chosen list, our share for two came to $112.21, plus a mandatory 20 percent tip added for our party of seven. No worries; service was so good that I added a few more bucks.