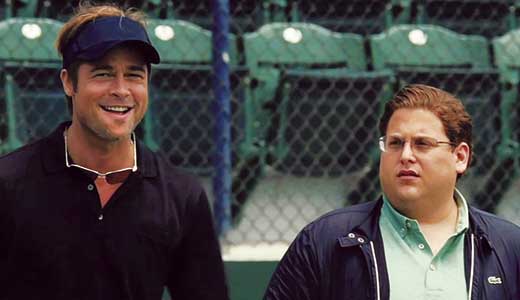 “It’s hard not to be romantic about baseball,” Oakland Athletics general manager Billy Beane says at one point in “Moneyball” — which is also why so many bad movies get made about it. In this case, it’s not exactly surprising that a Hollywood film based on a book about statistics misses out on some of its nuance and analytical depth. Nor is it surprising that the same Hollywood film, based on a book that is by and large about sabermetrics — a blanket term for hardcore baseball-stat analysis — never once mentions the term “sabermetrics.” The surprise is that it’s actually pretty good anyway.

In the opening scene, Beane’s Athletics are one out away from losing to the New York Yankees in the play-offs. Even if you didn’t watch the 2001 American League Division Series, you probably have a good idea of who won the battle of 114 million Yankee dollars against 39 million East Bay bucks. The first layer of the story focuses on Beane (played effectively, if sometimes glibly, by Brad Pitt) as he searches for a way to beat the Yankees of the world on a fraction of their budget. And do it while losing his best players year after year to teams who can afford to pay them what they’re worth.

In an oddly campy meeting with Cleveland Indians GM Mark Shapiro, Beane meets a shy, geeky guy who, through a series of whispers, effectively vetoes a trade based on his data-analysis of the players involved. Sensing something special, Beane promptly hires him away. That guy is a Yale economics grad named Peter Brand — played with blundering charm by Jonah Hill — who is emphatically and importantly not a traditional baseball man. The fictional Brand is actually a composite of current New York Mets vice president of player development and scouting, Paul DePodesta, and “Moneyball” author Michael Lewis, and it’s through his sometimes stuttering lips that a few basic tenets of sabermetrics get explained. Or at least alluded to, as complicated-looking spreadsheets flit across the screen suggestively until suddenly Brand has printed out a squad of cast-offs with abilities that other teams undervalue — and which, therefore, the cash-strapped A’s can afford.

Of course, Oakland’s gang of salty old-school baseball scouts balks at their ship’s sudden, unconventional new bearing. So does the team’s manager, Art Howe — played with acidic disdain by a surprisingly well-placed Philip Seymour Hoffman. While the book takes a wider and more interesting view of the team’s inner conflicts (and of the larger economics of baseball), they’re compellingly raw here even in their boiled-down form: macho tradition against Ivy League pedigree. Gut instinct against evidence-based analysis. The rational self against the emotional self. Beauty against brains.

Steven Zaillian and Aaron Sorkin’s smart, punchy script keeps the clubhouse tension at a low boil while fleshing out the backstory. What’s eating Billy Beane goes deeper than losing to the Yankees, though he hates that plenty. Beane was once a prized baseball prospect himself, lavished with praise and signing-bonus cash by the scouts who now advise him not to draft a player with an ugly girlfriend. (It shows a lack of confidence, they tell him.) On this worldview he declares war. The second layer of the story relives Beane’s painful passage from high-school hotshot to big-league flame-out. And if anyone’s justified in calling bullshit on the way scouts evaluate players, it’s Beane — even if it’s taken him years and a data-crunching super-nerd assistant to figure out why they get it wrong so often.

Like the game itself, “Moneyball” is about failure: a failed career, a failed marriage, and finally a climactic failure that director Bennett Miller is smart not to sidestep or transform into a feel-good, game-winning-home-run moment. And like the game itself, the film is also an extended metaphor for life — even if, unlike so many of its predecessors, it’s intelligent enough not to club the viewer with The Deep Symbolic Meaning of Our National Pastime. Instead, the fictionalized, less geeky film version succeeds in capturing much of the book’s spirit, touching on the basic theories of sabermetrics and — in a disarming, pitch-perfect ending — allowing itself to be just a little romantic about baseball. After all, as Pitt says, it’s hard not to be.