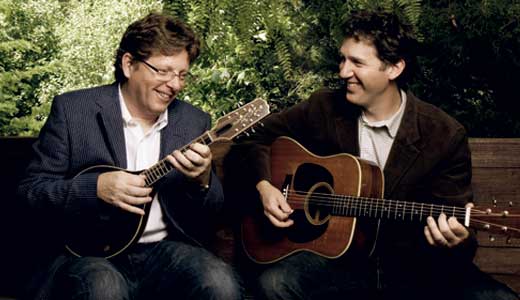 When Tim O’Brien went solo after the dissolution of his popular bluegrass band Hot Rize, his path was not entirely clear. The West Virginian had established himself as a talented mandolin and fiddle player, singer and songwriter, but a short stint on a major label in Nashville didn’t work out. In hindsight, it’s easy to see how his various skills would help him forge a diverse and satisfying path, but it didn’t come without challenges.

“I’ve just got that classic attention deficit syndrome. Traditional music, there’s so many angles, and there’s a community — the community’s all around, and I guess I’m susceptible to my environment and different things as I come upon them,” O’Brien says. “I see no reason to wall myself off. As a consequence, I say yes to a lot of projects. I learn a lot. It gets a little scattered sometimes, but mostly I like it. I like the smorgasbord part of it.”

O’Brien and guitarist Bryan Sutton play together in Louisville on Saturday, though this duo show comes on the heels of a recent run of Hot Rize reunion shows, where Sutton joined the surviving founders.

“We did one this time last year for the same length of time, about 10 days,” O’Brien says about the Hot Rize tour. “It’s just kind of a check-up, we see how we’re all doing … It’s a family reunion.”

Would doing it for more than 10 days make it less special? “Yeah, I think so … We broke up in 1990, but we never really went away; we just wanted to move on to something else. It’s still kind of the same thing. I’m mostly into pursuing different things, but when I do get the jones to play traditional bluegrass, it makes sense to do it with these guys. It’s where I made my mark in that game; it’s so formative, it’s definitely where I come from.”

Even more like a family reunion is his new project, due next year. O’Brien and his immediate family members — his sister Mollie, her guitarist husband Rich Moore and their children — are recording an album of songs by Roger Miller. “We have a set … mostly fairly obscure ones. It’s very exciting working with the family there. They rose to the occasion.”

So far, no major problems or rivalries have emerged. Or maybe Dad, 57, just hasn’t realized it yet. “I don’t know. I’m sure there is. There’s insecurities and kind of wondering why we’re doing this. Mollie and I are the ones who have been on the stage and traveled the world. I think they kind of wonder if they want to get into that or not. Everybody’s got their own slant, the music that they’re listening to. I mean, there’s a lot of common ground — Gillian Welch, Tom Waits — that’s one reason why we chose the Roger Miller bag, because it’s quirky enough that everybody can get into it. It unifies it, in a good way.”

The multi-faceted stringman has another session booked with British guitar god Mark Knopfler, who asked O’Brien to play in his band last year.

“That should be great. He’s a master songwriter and musician, and he has a beautiful studio in London, so I’m looking forward to working there.”

O’Brien thrives on the collaborations, even if it has been challenging at times for his family. He follows his desires, buoyed by playing to audiences that appreciate timeless music. Though the music industry encourages repetition of proven formulas, O’Brien finds that “really hard and boring after a while … I really admire somebody that can do that. Del McCoury, for instance, I really admire because he doesn’t change his music hardly ever; he mostly does the same show, he makes new records, but he mostly does the same show, and his fans love it. And he seems to love it. I get a little restless. I just couldn’t do that. So I go back and forth. Sometimes it gets a little too smooth, and I go and mess it up.”