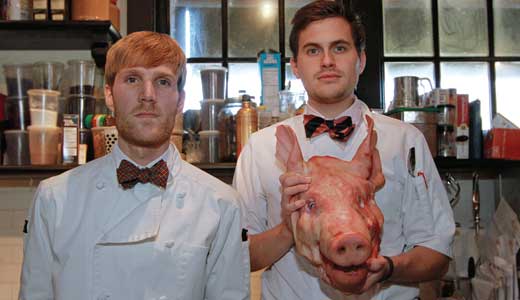 Last month, a writer for Zagat suggested it might be time to stick a fork in the locavore movement when she included farm-to-table on her list of “8 Food and Drink Trends that are Totally Played Out.” (The local-first practice came in at No. 6, just ahead of “Old-timey cocktails that taste like medicine.”) Kelly Dobkin’s article raised hackles with some readers, in part because it seemed to fly in the face of current conventional wisdom. For instance, on its own list published that same week, Bon Appetit magazine named Husk — a locavore’s paradise in Charleston, S.C. — the best new restaurant in the United States.

But, maybe there’s a kernel of truth in that Zagat piece; now that locavorism has taken hold, an establishment should have to do more to win accolades than simply post a map of their 100-mile ingredients radius. It’s what Husk — and much closer to home, the Anchorage Café — does with its backyard veggies that make it deserving of our patronage.

During a visit to the Anchorage Café, owner Bruce Lake said his recent addition of a farm-to-table, small-bite menu came at the behest of café regulars (as well as wife Courtney, a longtime devotee of Alice Waters, a renowned California chef and organic good proponent). Some patrons made the decision easier by delivering homegrown products. Lake and executive chef Andy Myers describe the new menu as a concerted effort between café and customer: from the backyard gardener who donates peppers too hot for his kids, to the neighborhood beekeeper’s fresh honey, to a nearby farmer’s Toulouse geese and heritage duck.

“It seems that for a little town, Anchorage has somebody doing just about everything,” Lake says. “It’s been fun. It’s fun to see people show up with a box of this, or bag of that.”

One of the boxes to arrive that day was filled with heirloom tomatoes from the gardens of the Bellewood Home for Children, located just 499 feet from the café. Myers and his chef de cuisine, Ryan Rogers, transformed these into tomato tarts that were soft enough to cut with a spoon, with a shell that crumbled only after hitting your tongue. The Capriole Goat Cheese (from 33.6 miles away) had been charred lightly with a brulee torch, and an arugula-walnut pesto made from Grateful Greens produce (20.2 miles) added to the slightly smoky aroma.

If you’re scoring at home, that dish traveled less than 60 miles, including the 499-foot tomato delivery. But reduced emissions are not why a Louisvillian should make the 20-minute drive to Anchorage.

Eating carrots that weren’t harvested 1,838 miles away (the national average, according to the Leopold Center for Sustainable Agriculture) is certainly a bonus, but a better reason to hit up this new menu is the type of unexpected mingling and crafty presentation found on dishes like the heirloom baby carrots. There’s a fine line between artful and showy, and the kitchen here manages to stay on the right side of that marker. The multi-colored carrots come partnered with a glass-like nugget of house-made pecan brittle, tiny cuboids of pickled ginger and a drizzle of curry vinaigrette. If that sounds overblown, blame the writer’s description. The plate itself achieves a fine scale, balancing earth with sweetness and spice.

“We definitely put a lot into the presentation. I don’t like things to be too overly thought out in a plate-up, but we put almost as much effort into plating as preparation,” Myers says.

Myers and Rogers are two of the brightest new chefs in town and are certainly worth following. “Small bites” doesn’t quite tell the story of what they accomplish with this ever-changing, seasonal menu. Each Monday, the duo gets creative, building off their usual format of local pork, duck and rabbit. “We’ve had duck 20 different ways, just in the first six weeks we’ve been doing this,” Myers says.

While sampling across the board — which this inexpensive tasting menu makes possible — ambrosial wafts from the next day’s hog-head terrine vied for attention with the plates hitting the table. Next up was the duck Myers mentioned, on this date arriving in dirty rice form and dubbed “Duck Celebration.” That is, a sous vide breast, confit leg and separately roasted skin that should not be legal. With its ecstatic savoriness and snappy crunch, the morsel could replace the bacon in a BLT.

The low mileage feast closed with house-made pawpaw ice cream and a touch of Anchorage honey. Rogers, a former New Yorker and alum of David Chang’s Momofuku, confessed he had never heard of the fruit — the largest to grow on this continent — until having it pointed out to him while on a hike with co-worker Hanna Newman. But Rogers and pawpaw became fast friends.

Café manager Jenn Desjardins, who grew up in Lexington with a pawpaw tree in her yard, delivered the best line on Rogers’ nutmeg-spiked final course, revealing that the only thing she thought this “Kentucky banana” was good for was throwing at school buses. Desjardins agrees that Rogers may have found a better use.