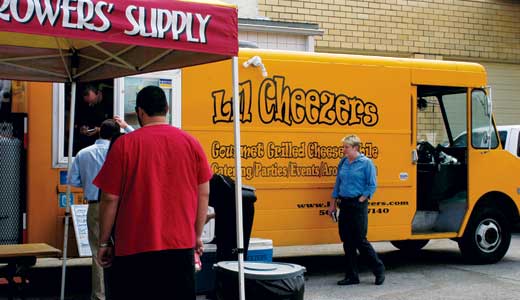 “Food trucks add a new element of energy on the street and we needed to relax the regulations to encourage more of them,” wrote Fischer. “This is a win-win for the community and for these budding entrepreneurs.”

Some of those “budding entrepreneurs” had quite a different reaction when they heard about the revised regulations, which the Metro Council had approved five days earlier.

“These ordinances went into effect 5 days ago and they kill every mobile food operation that you all are fans of,” Matt Davis, owner of Lil Cheezers food truck, wrote on Facebook. “They END our business until we can get compliant.”

MozzaPi’s Facebook status that morning read “Due to the new ordinances put into effect for food trucks in our city I have canceled all of our public events for this week and next.”

A disgruntled Davis appeared on local TV news, and a flurry of Facebook posts and tweets ensued, as food truck fans expressed shock and outrage at what they viewed as their imminent demise.

But by the time Monday rolled around, Louisville’s food trucks were still cooking, even if some of their owners remained skeptical of and upset by the ordinance.

This confused dance of city government officials and food truck operators is nothing new, as Louisville finds itself among a growing number of cities struggling to regulate this fast-growing breed of restaurants on wheels.

The ordinance, passed unanimously by the council, undeniably relaxed regulations on food trucks in two areas. Instead of having to obtain a permit for each location that a food truck operates, now owners simply have to obtain one permit per vehicle. Also, the “buffer zones” required of trucks — the distance between residential zones and similar brick and mortar establishments — was cut in half.

What Davis didn’t like is what remained in the law, particularly requirements for owners to 1) obtain a criminal background check for every employee, 2) provide the city with a detailed map of every place they intend to operate, and 3) obtain the notarized consent of the property owner where they do business — a person who often lives out of state.

Davis says these requirements — which already existed, but were not previously enforced — discriminate against food trucks and present unnecessary obstacles to their businesses. He also feels the mayor’s office, which held meetings with food truck owners prior to the passage of the ordinance, blindsided them by not mentioning that these would now be the set law of the land.

“Those meetings with us were like window dressing. It all got passed in a council meeting without our knowledge, and we were handed a press release five days after. The only way that it can look from where we’re sitting is shady and underhanded.”

But according to the mayor’s office, the ordinance simply codified pre-existing regulations.

Councilman James Peden, R-23, who chaired the committee that approved the ordinance, says that it passed because they didn’t hear any objections from food truck owners.

“I personally tabled it in committee and said there still seems to be a lot of bureaucracy involved with owning a truck,” Peden says. “I held it for an extra meeting hoping someone would come forward and offer some further advice, criticism, something. The only person that spoke to this ordinance was Mr. Coan, who had been meeting with the food truck industry. So the council could only make the assumption that everybody was on board with the needed changes.”

But both Coan and Peden tell LEO Weekly that the administration and Metro Council might review these rules to determine if they should be relaxed.

“I’ve already talked to Mr. Coan at the mayor’s office,” Peden says, “and maybe we just need to make an entire new chapter that exempts all the food vendor trucks from the existing vendor law. And then just make a whole new chapter just for them. He said that’s a possibility.”

In the meantime, Coan says they will continue not to strictly enforce the rules in question, adding that food trucks will not mysteriously disappear overnight.

“We obviously can’t and don’t want to say, ‘Don’t follow the law,’” Coan says. “But what we’ve said is, it’s the furthest thing from the truth that now our (Inspections, Permits and Licenses) employees are out on the street like police trying to find these guys and shut them down.

“We would like them to try to come into compliance with the rules and regs as quickly as possible. If they could accomplish this by the end of the year, that’d be great. We’re just working in good faith with them, and we want them to work in good faith with us.”

As for Davis, the man behind Lil Cheezers, he regrets being “over-emotional” on the day he learned of the ordinance, but he still hopes that the administration and council will move to ease regulations on his business.

Since then, his truck has continued serving customers, as he urges his Facebook fans to “come getcho illegal cheese on!”