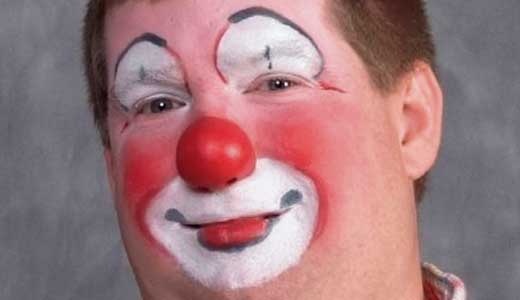 Jason Clopton’s kids aren’t afraid of clowns. His daughter has already begun her clown life, taking the name Derby Belle. She’s got her own clown nose and her own makeup, necessary tools because, while she could share her dad’s makeup, they obviously couldn’t wear his clown nose at the same time.

Professionally, Clopton is known as Bonkers T. Clown. A graduate of the InKy Clown School (aka “The other U of L — University of Laughter”), the New Albanian is now the president, and a full-time clown and balloon twister. In his line of work, Coulrophobia — fear of clowns — is a persistent issue.

“This past weekend, I met a lady; I was in full clown, and she was standing there, but there was a table between us,” Clopton recalls. “She said, ‘I’m fine, but if you were any closer, I’m telling you right now, you might not be standing.’ I’m looking at her like, c’mon! I put makeup on just like you do! … It’s very sad that people are scared.”

This fear of clowns stems from a couple of things, Clopton says. While we train children to be wary of strangers, parents still force them on the laps of characters like Santa Claus, planting the seeds for potential trauma. Santa gets a pass because he gives out presents, while clowns are more likely to embarrass someone by grabbing them out of a crowd and making them look foolish.

The second reason is what might be called the “Sideways” effect. Just as the movie’s memorable criticism of merlot led to a substantial drop in that wine’s market for years, the 1990 TV miniseries “It” — inspired by the Stephen King novel — scarred a generation terrified by Tim Curry’s unforgettable portrayal of Pennywise, the murderous clown.

“There’s some people that I have been around that are honestly terrified, full-grown adults,” Clopton says. “One lady I thought was joking around with me — when I grabbed hold of her she almost went into convulsions. I was just going to give her a hug.”

So Clopton has developed ways of handling fearful people. He identifies himself as an “Auguste” clown, a type that is less hidden by makeup than more classic clowns. “I just do the makeup above my eyes, and I do my muzzle. There are different types of clowns, and most of the time when they say they’re afraid of clowns, they’re more afraid of a full whiteface clown.

“I ask them, ‘Why are you scared? You can see I’ve got normal skin, just like you do. I’m not wearing no gloves …’ I’ve had people say they’re afraid of clowns, then a child will run across to give me a hug. You have to use each situation differently.”

The husband and father of two became a clown to spread joy. After leaving a job as a Toys ‘R’ Us manager and working in a payment processing center, “There was a void because I wasn’t interacting with kids no more. I just happened to pass a sign one day that was flashing on a billboard that said, ‘Clown School,’ and it had a phone number. … At the time, I was working a full-time job; it was my release — I could put on my makeup and forget about my worries, and go have fun.”

But due to the prejudice clowns often face, he works mostly as a balloon twister. “Nine times out of 10 when I get a balloon job, they normally just want me for my balloons … I’ve done a lot of festivals where they don’t want me in clown.

“People need to realize that we do have our own clown prayer — to bring more laughter than tears.”