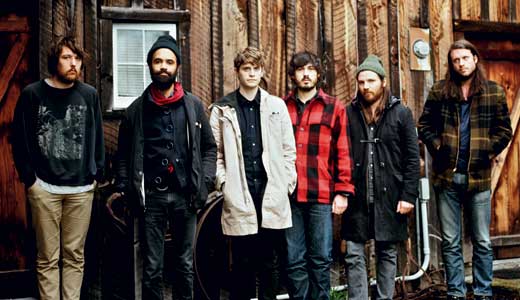 The Pacific Northwest-based folk rock band Fleet Foxes emerged, seemingly overnight, in 2008 and quickly became one of the most popular and acclaimed new bands in years. Their second album, Helplessness Blues, was released by Sub Pop in May. LEO phoned leader Robin Pecknold at 2:30 p.m., as he was just waking up in Raleigh, N.C., after a long night of driving.

LEO: Are you comfortable sleeping on the road, in the bus?
Robin Pecknold: It’s OK … I’m not sure that I would just hire a bus just to drive me around, not playing shows.

LEO: What else do you do to entertain yourself and your bandmates on the road?
RP: We have bikes we take on tour. Skye (Skjelset) especially likes to get his out and ride around — he likes to see a city that way. I like record shopping.

LEO: Have you seen a lot of stores closing around the country the past couple of years?
RP: No — I mean, I feel like the ones I’m looking for are just, like, vinyl-only. I’m sure those guys get hit, but they’re also catering to a more specialized crowd. I feel like it’s the ones that try to do everything that seem like they’re not making the marks and struggling.

LEO: You have your particular focus, but you guys have also been part of a wave that’s had some popularity in the past few years.
RP: Yeah, I mean, we’ve been lucky in finding an audience. Everything’s sort of cyclical, and stuff will come in and out of favor, but it’s nice that we have found people that are into what we do.

LEO: Have you noticed any differences between living in Seattle and Portland?
RP: I think for a guy like me who is, I guess, at work on the road, Portland is a far more chill city to come home to. There’s less big companies based there, that sort of helps. They seem a little less focused on making a bunch of money. Obviously, it’s better for a city if you have a strong economy than not, but for a musician coming to Portland, it’s cheaper and people are down to hang out. They don’t have to work as hard, ’cause it’s a cheaper place to live than Seattle.

LEO: Have you seen that affecting your songwriting?
RP: I don’t know. I guess I feel like we’re more free to do … anything when I’m there. I think being in Seattle, I’d get recognized a little more often, so I’d be more hesitant to go out and do stuff. I don’t know. I feel more anonymous, but that’s a small … like, one guy a week, you know?

LEO: How have the new songs been going over live since the record came out?
RP: I think it’s good. We wrote this newer record to sort of complement the first one, in some ways — expand and, also, crystallize some of the ideas from the first one. So, it’s cool. The set feels a lot more wide-reaching now.