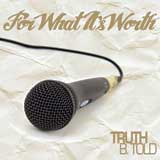 The December-born Truth B. Told aspires to be a Gemini this time out, showcasing two sides of his artistic persona. The first half of the album is a mixtape — five songs lifting familiar soundtracks (Lupe Fiasco, J. Cole) for a pretty effective hip-hop foray. Those who know him primarily as a spoken-word artist may raise an eyebrow the first time through, but Truth is a perfectly serviceable MC and could transition easily to hip-hop full time. The second half of the record is a live set from Dayton. Here, he performs the best cuts from last year’s two-volume Lyrical Therapy set. It’s a friendly set with an eager audience and goes a long way toward loosening up the heavily starched stigma of the spoken-word experience. “Superhero’s Resignation + F*ck You (A Love Poem)” is an R-rated sermon that rivals anything Dr. Cosby preaches at 8, 9:40 and 11:30 a.m. every Sunday.