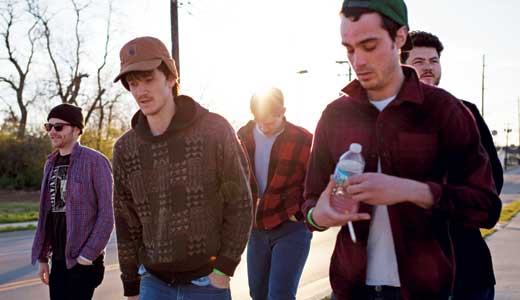 Plenty of startling moments occur on Celebration, Florida, the Fat Possum Records debut recently released by upstate New York folk-rockers The Felice Brothers. But the most startling arrives in the form of a boxing tune.

“Stay away from Don King,” warns the song’s speaker — presumably Rooney. Felice Brothers bassist, Christmas, who claims he has no surname, agrees with the observation that his band specializes in narratives — or at least musical sketches — of unusual, enchanted, folkloric characters.

“Tyson’s story, personal and professional, is very much a fairy tale,” Christmas says. “We find that the weirder the character, the greater his or her story sounds.”

The theremin-kissed, synth-addled, sci-fi piano ballad “Oliver Stone” is another example of the Felice Brothers’ ability to infuse a pop culture figure with pathos. Here, the story centers on an unnamed old pal of the filmmaker who seeks to construct a time machine to revisit their early, glorious years together.

Until I spoke with Christmas, I’d assumed the song was the band’s thinly veiled screenplay pitch to Stone.

“Actually, that’s not a bad idea,” he says with a laugh. “We need to write a song called ‘Yo, Spike Lee, Check This One Out.’”

The band’s appreciation for the offbeat comes through in their venue preference. Christmas says the Felice Brothers love playing miniscule bars just as much as giant Clear Channel-owned festival stages. And, he stresses, they’d rather play Zanzabar than anywhere else.

“Man, we always play Zanzabar when we come to town, because the crowd there is always responsive, appreciative. We appreciate it.”

Too many hackneyed music critic adjectives come to mind when listening to and describing Celebration — aqueous, moody, surreal, haunted. But what else can you expect from an album recorded in a high school gymnasium in Beacon, N.Y.?

“I guess that was our intention, to sound something like that,” Christmas says, “but it would’ve been really hard to plan something like this new record in that environment. We’re definitely interested in surreal, dark undertones, in the abstract. I think our decision to record in that building made a lot of the decisions for us in a way. We’re always looking for strange places to make records in, even if — as was the case with Celebration — there was lot of work involved in setting up.”

Like some warped offspring of Blonde on Blonde-era Bob Dylan and The Flaming Lips’ In a Priest Driven Ambulance, Celebration is hardly a driving-down-a-highway record. It’s more of a curling-up-in-a-Kentucky-Motel 6-with-a-boombox album. It’s more about interior journeys than exterior ones.

“Yeah, a Motel 6 is probably a good place to hear this record,” Christmas says. “You can give a deep listen to it in that kind of surrounding.”

But why reference the Sunshine State in the album title?

“New York people have a special relationship with Florida,” Christmas explains. “It’s where we go to die, like Valhalla. Can’t wait to buy a condo there in 40 years.”

Live, don’t expect a muted, low-key performance by the Catskills-based quintet. They bring fresh, raucous interpretations to songs new and old (the band formed in 2006 and has recorded a prolific seven albums since) with every show, and they’re capable of anything musically.

“In my case, I examine each song to see how I can make it better,” says Christmas, who learned to play bass in the Felice Brothers. “No single instrument defines our sound. My job is to hold down the low end, and I often sneak in through the back door rather than start pounding out root notes. We’ve been playing together so long we have a telepathic bond. We know what to do and what needs to be done in order to make a song really work.”