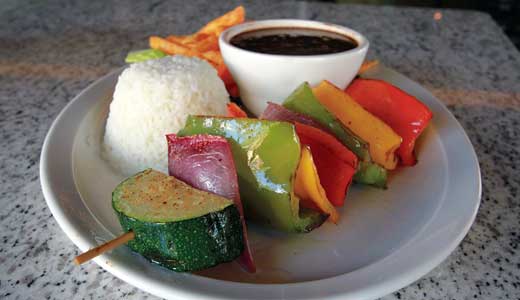 So where does a restaurant critic go out to dinner if he has family in town? This is not always an easy question.

Go to the finest dining rooms, the places I love? That’s easy counsel, and way tempting, but more often than not I’ve checked out the local favorites too recently to justify going back.

Drag them along to the next place I have to go, whether they like it or not? That can be tempting, too, as any therapist who knows a thing about sibling rivalry can attest.

But in the real world of practical matters, the answer lies somewhere in between. Briefly stated, it’s something like, “Pick a place that’s due for review and that I think they’ll enjoy.”

And so it was when my brother, Matt, came through town recently on sabbatical from his job in Lima, Peru. Matt speaks Spanish like a Peruvian native, so an eatery with a Latino accent made sense. I’d been keeping an eye on Cubana since it opened in Clifton early this year anyway.

I’ve enjoyed lunch at Cubana several times, but for one reason or another had never focused on the place for a dinner review. Matt’s visit offered a good opportunity to catch up, and Cubana proved to be an excellent choice for the occasion.

That Spanish thing didn’t work out for us, though: The servers at Cubana spoke Louisville English as fluently as I do, although I’m sure there was a Cuban chef back in the kitchen. The building that houses Cubana boasts quite a local-restaurant heritage: It was briefly Danielle’s, an excellent but short-lived upscale bistro where Chef Allan Rosenberg plied his art, well before he achieved local fame as the founder of Papalinos NY Pizzeria. Further back, Baby Boomers will remember it as the home of the original Lynn’s Paradise Cafe; a Jamaican joint with great homemade ginger beer; and a pretty good Korean spot called Little Bit of Seoul. With such a diverse culinary heritage, a Cuban eatery fits right in, and newly painted walls in aqua and peach give it the sunny tropical look of a Havana plaza.

Its menu contains many of the Cuban standards that have become familiar to local foodies since the arrival of Havana Rumba in 2004 kicked off a Cuban boomlet. Even if you aren’t familiar with Cuban dishes, though, the menu makes it easy, subdividing the bill of fare into portions based on the main ingredient and helpfully offering an English translation. (Carnes is meat, puerco is pork, pollo is chicken, and so it goes.)

There must be a couple dozen main-dish choices, ranging in price from around $10 (for vegetarian dishes and meal-size sandwiches, including the classic Sandwich Cubano for $9.99) to the mid-teens: A hearty seafood casserole in Creole or cream sauce au gratin is $15.99. You’ll also find enough appetizers ($6.59-$9.59) to put together a tapas meal; and a lunch menu, available from 11 a.m.-3 p.m. Mondays through Saturdays, offers about 16 choices, including a sandwich and soup-or-salad choice for $8.99. I’ve enjoyed the Cubano on past visits and can testify that it’s a worthy example of the genre.

Cubana wasn’t terribly crowded fairly early on a Thursday evening, which made conversation easy. We started our dinner with a shared appetizer, Empanadas Vegetarianas ($6.59): A pair of flaky pastry pillows were stuffed with a mix of spinach, corn, chopped onions and bell peppers, and cheese. They were so grease-free that I almost wondered if they’d been baked, not fried; but their flavor was great, and if two empanadas required careful carving for three to share, that’s OK, as it made it easy for me to nip a little more than my share. They came with a dish of pink dipping sauce that was creamy and sweet, not hot, and went well with the veggie stuffing.

Matt’s pick, Pollo con Mojo ($12.99, described as “marinated chicken breast”), started with a flattened skinless, boneless chicken breast, a cut that can be mighty boring but that gained interest here from a tangy-sweet citrus marinade, a spell on the grill to add flavor and texture, and a tasty topping of grilled onions and Cuban-style mojo sauce, which is basically a garlicky citrus vinaigrette. All the main dishes were accompanied with exceptionally good white rice, tender black beans and a couple rounds of fried plantains.

Mary’s Cerno alla Parilla ($14.99) earned a thumbs-up: A mild, flaky grouper fillet was rubbed with a mojo-like mix of garlic and olive oil, with a blend of chopped parsley and aromatic cilantro to add herbal notes in place of the sour citrus.

My choice, Pincho Vegetarianas ($10.99), scored as the most colorful dish of the evening and was in competition for most flavorful. Literally “veggies on a spike,” it consisted of big, bright squares of yellow, red and green peppers, red onion and chunks of summer squash and zucchini, drizzled in garlicky mojo and grilled on a skewer until they were sizzling and irresistible.

Dessert? One flan ($4.99), please, and three spoons. Dubbed “Abuelita’s flan,” which means something like “Granny’s caramel custard,” it was creamy, smooth and rich, good enough to have come from a sweet grandmother’s kitchen, assuming we’re talking about a Cuban grandmother.

There’s a bar including a short wine list and some Latino bottled beers, but we went with water on this jaunt, bringing dinner for three to an affordable $57.61, to which I added a $12 tip.