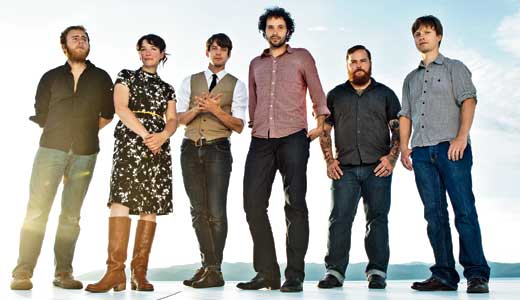 The coastal Oregonian indie folk pop rock band Blind Pilot first earned notice with their 2008 debut, 3 Rounds and a Sound, and subsequent tours with The Decemberists, Gomez and The Hold Steady. Now touring to promote their sophomore album, We Are the Tide, the bicycling enthusiasts headline a bill at Headliners on an otherwise quiet Monday night. LEO spoke with bandleader Israel Nebeker about music, and a movie that has had a major impact on both of our lives.

LEO: You’ve got a lot of buzz around the new album. Do you feel any pressure now?
Israel Nebeker: Not any, because I haven’t been listening to any buzz (laughs). I try to not worry about things until it’s already happened. In the small town I live in, none of my friends are coming up to me and saying, “Hey! …” … whatever.

LEO: What’s your small town?
IN: It’s on the coast, it’s called Astoria.

LEO: I haven’t. But I know that “The Goonies” and “Kindergarten Cop” were filmed there, and it’s beautiful.
IN: Oh yeah, “The Goonies.” (laughs) Totally.

LEO: Do you have any good “Goonies” stories?
IN: Luke, our bass player — you know that house that they live in, where Chunk comes over and does the Truffle Shuffle and the bowling ball gets set off? Luke grew up just a few houses down from there. Now, people still make pilgrimages from all over — you wouldn’t believe it — to see the house.

LEO: I’m excited to be talking to a guy who knows a guy who grew up near there.
IN: He thinks it’s funny — it doesn’t bother him.

LEO: So, what is it about Oregon that brings forth so many interesting musicians? We have a pretty great scene here in Louisville —
IN: Yeah, totally. Well, Kentucky’s a pretty great example of how landscapes and places can breed a certain kind of music, right? Music that kind of feels like the land. I think that happens in Oregon. In Astoria, it’s kind of moody and quiet, but has this sort of powerful nature.

LEO: How is the culture in Astoria?
IN: It’s got some cool stuff going on. I’d say it’s still in the stage of developing. It’s had a pretty great visual arts scene for a while. Music … I think, similar to Portland but not quite as extreme — there are a lot of people who are creative that move here for inspiration and have started to create a scene. It’s still personal, everybody knows everybody.

LEO: Who would you want to tour with, in your fantasy?
IN: Let’s see … I definitely can’t speak for the whole band, but, gosh — maybe Arcade Fire or Joanna Newsom. Or Martha Scanlan. She’s great.

LEO: The Decemberists are taking a break for a few years. Do you think you can take their place, hit No. 1 on the Billboard charts?
IN: Yeah! Yeah, we can do it! (laughs)

LEO: Do you think about album sales, business stuff?
IN: Yeah … I try not to too much. As long as we can get by and keep making music, make a living at it, that’s living the dream, as far as I’m concerned. That was always my end goal. It’s strange — you can’t link the two too closely, the creating and the doing it with the money that it relates to. It’s not a real relation.