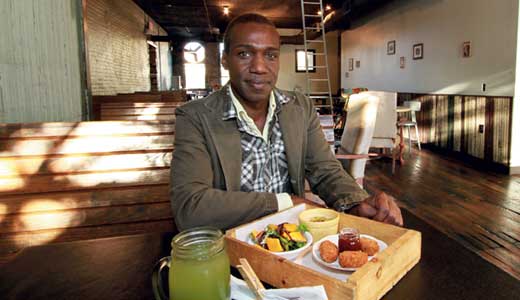 The best type of success is doing something unlikely and making it work, against the odds and what most might call common sense. One example would be Hillbilly Tea, the downtown eatery and gourmet tea specialist that opened last year.

When tea business veteran Karter Louis and his partner, Arpi Lengyel, decided to open the cozy spot for a lunch-only crowd, the hidden gem, located on a side street near the KFC Yum Center, immediately outgrew its initial design.

“Since we opened, week one, we reached capacity. We got pretty popular pretty fast — that, we did not anticipate,” says Louis, a Louisville native who also has worked on other restaurant concepts in larger cities. “A lot of our customers are not necessarily just people downtown … We took off really fast, but then it died down a little bit. Comments from people were like, ‘Oh, we didn’t think we could get in.’ We don’t want to convey that to people.

“I think if you own a large restaurant, people perceive a wait as OK. But when they see everything when they walk in the door, it’s a bit more daunting. We knew immediately that we wanted to expand, let guests come who wanted to experience the concept.”

But Hillbilly Tea had a second issue to resolve, as well.

“The No. 1 thing that some of our customers requested when we asked ‘What can we do to improve?’ was ‘Get alcohol,’” Louis laughs. “The size that we were before, we could not get a liquor license because we were too small. Certainly, growing does help us with that.”

Louis initially wanted to open a small, low-pressure spot that would pay tribute to tea first, and also to his roots, with what he describes as “good, wholesome food.”

“For me, tea has become a way of life, and I’ve put a lot into it, in terms of my career, and it resonates with me, certainly, and it’s amazing that I come home to Louisville and I say, ‘OK, I’ve done all these fancy tea places; this is my expression of tea … is it stupid?’” Louis says. “‘Or do people really get it?’”

After spending 20-something years in bigger cities, Louis wanted to return to Louisville, but says, “I still needed to have something to do for a livelihood. I told (partner Lengyel) that we would open up downtown, that we would be a lunch place open from 11 a.m. to 5 p.m., and we would be off on weekends. Now we open up at 8 o’clock in the morning, and we close at 9 p.m. — as soon as we get alcohol, we’ll close beyond that — and we’re open seven days a week, so it’s clearly not that. But it’s OK, it’s a good thing.”

Now expanding to the second floor, Hillbilly Tea soon hopes to introduce a liquor program that will include tea-infused vodkas, boutique wines, bourbon and a few local beers.

They also plan to incorporate another regional treasure. “We’re very excited about moonshine. There’s only two companies in the United States that are approved to sell moonshine; one of them is a company called Moonshine, from Tennessee. We’ll probably do some infusing with the moonshine, as well.”

For this, patrons can thank the heavy drinkers of Louisville, as well as downtown’s conventioneers. “I feel like a lot of people think we don’t want to serve alcohol, but that wasn’t the deal,” Louis says. “It was just that we didn’t plan on it; we just thought we’d be open for lunch. Last fall was when we started opening for dinner, and all those convention people would come and we’d have tables of six and eight convention people … they would say, ‘Where’s the alcohol?’ and get up and leave. That was very painful,” Louis says with a bittersweet chuckle.

“Instantly, I begged our landlord to let us go upstairs, and that took a long time. That space has never been used for anything other than storage in 80 years. There was a lot of infrastructure stuff that had to go on here. I think people thought it was going to be a matter of just coming upstairs and painting,” he laughs, “but it actually was a lot of work.”

Now the time has come for Louis’ little tea retreat to become a Louisville nightlife fixture.

“It’s been a blast. I didn’t really know what to expect, coming home to Louisville … They say you don’t make it till you make it at home. The success of Hillbilly Tea is the cherry on top of all the things that I’ve done.”