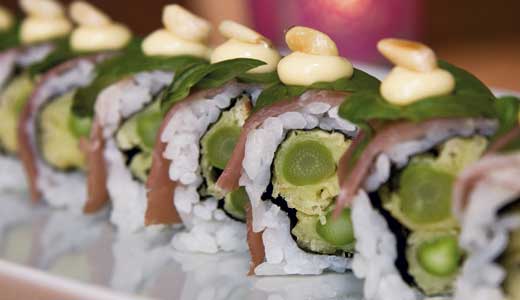 I was 10 or 11 when my parents came home from dinner at Benihana of Tokyo with a drinking glass shaped like a Geisha and a tiny box of matches bearing the Benihana logo. I was mystified that people in my own family had experienced something so exotic.

Of course, their experience involved a hibachi grill, and my guess is their exotic dinner consisted of rice and grilled chicken. Sushi wouldn’t arrive here until around 1985, and it was a few years later that a brave entrepreneur opened Sachicoma on Baxter Avenue, Louisville’s first sushi restaurant.

The trend grew slowly from there — by 1998 or so, only a handful of sushi restaurants existed. Today, there are more than 40 in the Louisville area, and sushi can also be found at most grocery stores.

Is something fishy here? Why is Louisville so in love with sushi?

“I think sushi is no different than a Chinese buffet now,” says Thanh Phat Le, owner of Café Mimosa, one of the city’s first restaurants to offer sushi back in the late ’90s. “It’s commercial.”

Le says when he took over his restaurant in 1997, Sachicoma was basically the only game in town. But the original space that housed Café Mimosa had a built-in bar area that lent itself to sushi, so Le decided to add it to his menu, which features Vietnamese fare. It stuck, and except for a short hiatus in 2009 — caused by a fire that forced him to move the restaurant — he has been serving sushi ever since.

About a mile south on Bardstown Road sits Oishii Sushi. Owner Raj Gurung came to the Louisville area in 1997 and remembers finding only a sparse sushi market.

“Business was OK,” he says. “But with more (restaurants), business is still doing OK. I think it is just getting more and more popular.”

Toki Masubuchi, who owns and operates Dragon King’s Daughter, which also is on Bardstown Road, shares Le’s sentiment that sushi has become more about commodity than cuisine.

As evidence, she notes that there are only a handful of Japanese restaurant owners in Louisville, including herself. Masubuchi moved to Louisville from Japan in 1995 and began serving sushi in Louisville a few years later. She later opened Maido Essential Japanese Cuisine in Clifton, and went on to open DKD (as Dragon King’s Daughter fans lovingly call it) in early 2009.

For her, sustaining business in such a competitive marketplace is about differentiation. For instance, DKD has a small sushi bar, but her cuisine is largely Japanese fusion, featuring tacos and flatbread pizza using sushi-style ingredients.

Maido’s menu is similarly different from the standard sushi restaurant, as it relies on Japanese sake bar staples that go far beyond the standard makizushi, or sushi rolls, to which most people are accustomed.

“I really make the sushi a little different from other people,” Masubuchi says. “I do go out to eat sushi every once in while, but I don’t bring (the experience) back to the restaurant. I think it’s half and half — some things (at DKD) are straight from Japan, and I mix other things in that are not used in Japan.”

So can Louisville continue to sustain the sushi explosion? Gurung thinks so — for a while at least. But for how long?

“Nobody knows,” he says. “Ten or 15 more years, maybe? It was the same with Chinese restaurants.”

Gurung will open a new Oishii location on Taylorsville Road this month, which will be nearly twice the size of his current spot in the Highlands, so clearly he believes the sushi market in Louisville still has some room for growth.

Le is not so sure. He points to the fact that Raw downtown has already become a casualty.

“I think the market is going to collapse itself,” he continues, “because people keep putting sushi out. Eventually it will be overwhelming. Some of them will have to be closed. You can’t make a lot of profit because there is too much competition.

“We are still doing pretty good because we are well known and people like us. But if there are too many, they will bleed to death, like Raw.”