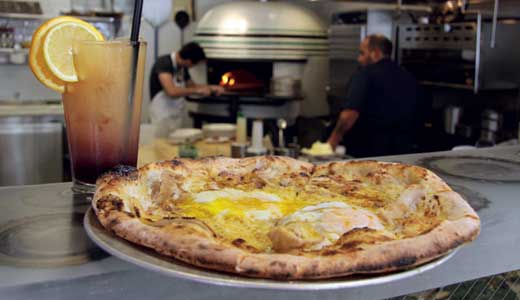 If breakfast is the most important of our “three squares,” brunch surely deserves something close to meal-of-the-week status. For many, the breakfast/lunch hybrid is a time to shake off the past week’s trials, while bolstering ourselves for the coming business days ahead. This often means unplugging with a non-digital copy of the newspaper and, most certainly, a drinkypoo or two to help us reset before Monday.

Locally, we suffered through a bit of a brunch drought following the end of The Patron’s 10-year run in ’09. There were, of course, plenty of decent buffets around town to help fill the void, but for the moment, let’s leave those to the teetotalers and after-church crowd. Let’s also set aside what Anthony Bourdain equates with discount sushi: that is, the after-thought, autopilot brunch thrown together with a kitchen’s leftovers.
What we’re seeing more of, late summer into early fall, is a return to the waiter service/signature cocktail-type affair. (Good news for us lazy sorts who don’t relish the trudge around the buffet table, no doubt trailing the guy who methodically constructs log cabins on his plate with all the sausage links.) Thankfully, a mini-trend of fresh, coherent and seasonal brunch offerings continues to spring up, featuring restaurant-specific cocktail programs like those found at spots like Harvest and Garage Bar.
Before opening Garage Bar, the wood-fired pizza joint with the life-sized Matchbox Car collision out front, Michael Paley honed his craft under four-star maestro Daniel Boulud, later becoming executive chef at Proof. A few weeks ago, the former New Yorker began serving fun brunch plates at Garage that depart from the typical Hollandaise variety. These include The Hangtown Fry ($13) an omelet reminiscent of “Angels on Horseback,” with its raw oysters, bacon and hot peppers.
Another good move is a breakfast pizza called the Monte Cristo ($14), an idea that feels like it’s been waiting to happen. The pie is notable for its smoky sweetness, playing fresh preserves and sticky sorghum against gouda and smoked chicken that’s sliced pancetta-thin. Most important, though, is the egg, whose runny yolk makes the perfect dipping partner for Paley’s Naples-style pizza crust.
Pair either of these with a Spicy Bloody Mary and Gulf Shrimp, or the Breakfast Shandy. Labeled the “workingman’s mimosa,” the Shandy’s sum is greater than its parts — the Pabst Blue Ribbon base vanishes into a refreshing balance with hibiscus and O.J.
Another standout drinker’s brunch can be had just steps away at Harvest. Coby Lee Ming’s cuisine stands as a reminder that seasonal and local can be brilliant. Each of Ming’s short, clean brunch menus includes the current date: indication that ingredients were recently gathered and that thought was put into that day’s fare. To reinforce this, past menus are recycled in clever ways, like when used as a spacer between the plate and hot skillet that my Tortilla Espanola came served in. This hearty potato and egg dish would be perfect before a day of lumberjacking, while being presented simply and tastefully with a drizzle of chipotle cream and grilled, rectangular toasts topped with a riff on tomato chutney.
Entrees all hover around the $10-$12 mark. Harvest’s breadboard and “baked goodness” items change weekly. Last Sunday featured Hog Jowl Scones and Bourbon Poached Pear & Pecan muffins. Speaking of bourbon, there are four whiskey cocktails on a “craft cocktail” menu that sneak in plenty of bar-geek references like Fernet Branca and Aperol.
A highlight was my sublime and accidental pairing of the Rustic Corn Soup ($6, apparently Ming’s “rustic” is what I call “elegant”) and the Kentucky Champagne, a drink that uses “champagne” purely in the metaphorical — that is, Old Forrester, Ale 8 and Tuaca, a vanilla and citrus liqueur.
This summer, Majid Ghavami, owner of Majid’s in St. Matthews, decided to drop lunch during the week in favor of Sunday brunch. Ghavami, who has 35 years experience on the restaurant scene, agrees that there was something of a “brunch vacuum” in Louisville, not quite filled by places like Wild Eggs, Toast and North End Café.
The Mediterranean-American Majid’s now offers a classic take on brunch, with keen attention paid to hospitality. Selections range from $10 to $15, with Champagne Cocktails and the like running you $5. Ghavami reports that what started out as a trickle soon grew to a steady stream of customers. His Sundays now generate about the same revenue that a week of lunches used to bring in. Hopefully this is an indicator that my favorite meal of the week will stay in town for a while.